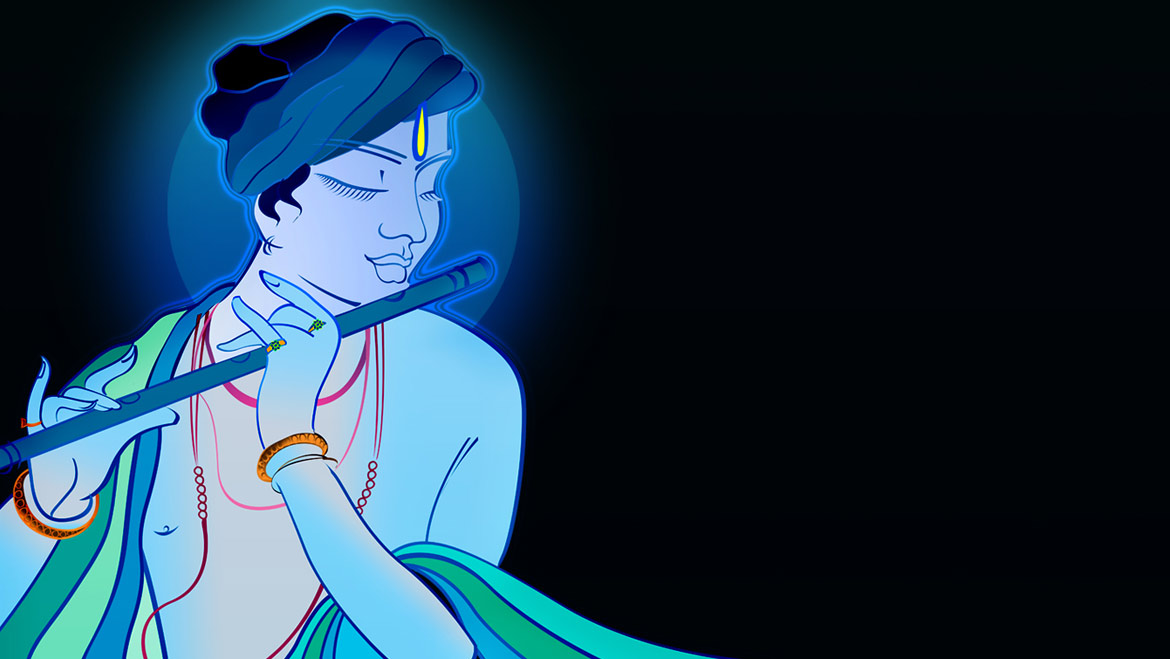 The much loved and revered god, Krishna has made an indelible impression on mankind. From re-educating us on Dharma to enlightening us about the reality of life, Lord Krishna has indeed remained a source of knowledge and wisdom. And be it the legends from his childhood, or that from Srimad Bhagavatam, everything indicates towards a divine individual that connects well with humankind. However, no matter how much we claim to be well-versed with him and his stories, there are a fact or two that we may be aloof from.

This blog brings some of those lesser known things about our beloved Lord Krishna to add more to your knowledge of him:

1. The name of Lord Krishna is basically an adjective, which means ‘black’ or ‘dark,’ another popular translation of the name is ‘all attractive’.

2. There are about 108 names of Lord Krishna amongst which the popular ones are Gopal, Govind, Devakinandan, Mohan, Shyam, Ghanshyam, Hari, Girdhari and Baanke Bihari.

3. Lord Krishna once preached against the orthodox form of worship of the Vedic Gods like Indra. According to Bhagavata Purana, Lord Krishna advised people of Brindavan to worship the Govardhan Hill instead of Indra as it brings the rain for agriculture. This made God Indra really angry and he sent out a terrible storm in Brindavan but Lord Krishna rescued the people by lifting the Govardhan Hill and using it as an umbrella to protect the villagers.

4. There were 8 wives of Lord Krishna including Rukmini, which were together called the Ashtabharya. It is said that Lord Krishna abducted Rukmini- the Vidarbha Princess, on her own request to save her from marrying Shishupala. The name of rest of the 7 wives of Krishna are Satyabhama, Jambavati, Kalindi, Mitravinda, Nagnajiti, Bhadra, and Lakshmana.

5. Once, Lord Krishna assumed his Virat (universal) form to kill Shishupal. And, even the blind king, Dhritarashtra gained divine vision during this time to be able to see this form of Krishna. On the occasion of the coronation of Yudhishthira, Shishupal disrespected Lord Krishna with abuses for more than hundred times, for which he forgave him as he had promised Shishupal’s mother. However, Krishna obtained his larger form when the abuse crossed the number 100, and then killed Shishupal. It is believed that Shishupala and Dantavakra were the reincarnations of Vishnu’s gate-keepers Jaya and Vijaya, who were cursed to be born on Earth, and can only be delivered by the hands of Vishnu.

6. Gandhari cursed the Yadu Dynasty that they will perish after 36 years, to which Lord Krishna said Tathastu (so be it). On the night prior to the death of Duryodhana, Lord Krishna visited Gandhari to offer condolences, she was agitated as she realized if Krishna wanted to put an end to the war, he could have done so, but he didn’t. Thus, she cursed that the Yadu Dynasty shall perish after 36 years, Lord Krishna himself wanted the same to happen, as he felt that the entire lineage had become Adharmi (sinful).

7. Krishna appears to be beyond the limitation of nature or that of death or anything related to human life. He doesn’t seem to grow old in the historical depictions of the Puranas despite passing of several decades. Mahabharata many times indicated that Lord Krishna is not subject to any limitations. In one such instance, where Duryodhana tried to arrest Krishna where his body bursted showing all creation within him.

8. Lord Krishna is also the part of Jain religion. He is represented as one the Triads, named Vasudeva (heroic figure).

9. The Buddhist Jataka tales also have the mention of Lord Krishna. In the Vaibhav Jataka, he is described as the prince and legendary figure in India who beheads his evil uncle Kansa and kill all the kings to rule over Jambudvipa (India).

10. The Bahá’ís believe that Lord Krishna was a “Manifestation of God”, or one of the prophets who has revealed the ‘Word of God’ to people on earth. Thus, it is reckoned that he shares an exalted image with Abraham, Moses, Zoroaster, Buddha, Muhammad, Jesus, the Báb, and the founder of the Bahá’í Faith, Bahá’u’lláh.

12. Lord Krishna granted Eklavya a boon after he sacrificed his thumb to Dronacharya. As a boon, he was granted another incarnation as Dhrishtadyumna who stepped out of the yajna fire with the purpose to kill Dronacharya.

13. Despite the popularity of Radha Krishna love tale, there are no traces of the existence of Radha in Shrimad Bhagavatam or Mahabharata or the Harivansham, which is about the life of Lord Krishna.

Note: In case you feel any of the fact mentioned in this blog is false or needs more detailing; kindly suggest us the changes, we will be more than happy to rectify the article for the good of all.