Learn about the Celebration of a Bond between Brothers and Sisters 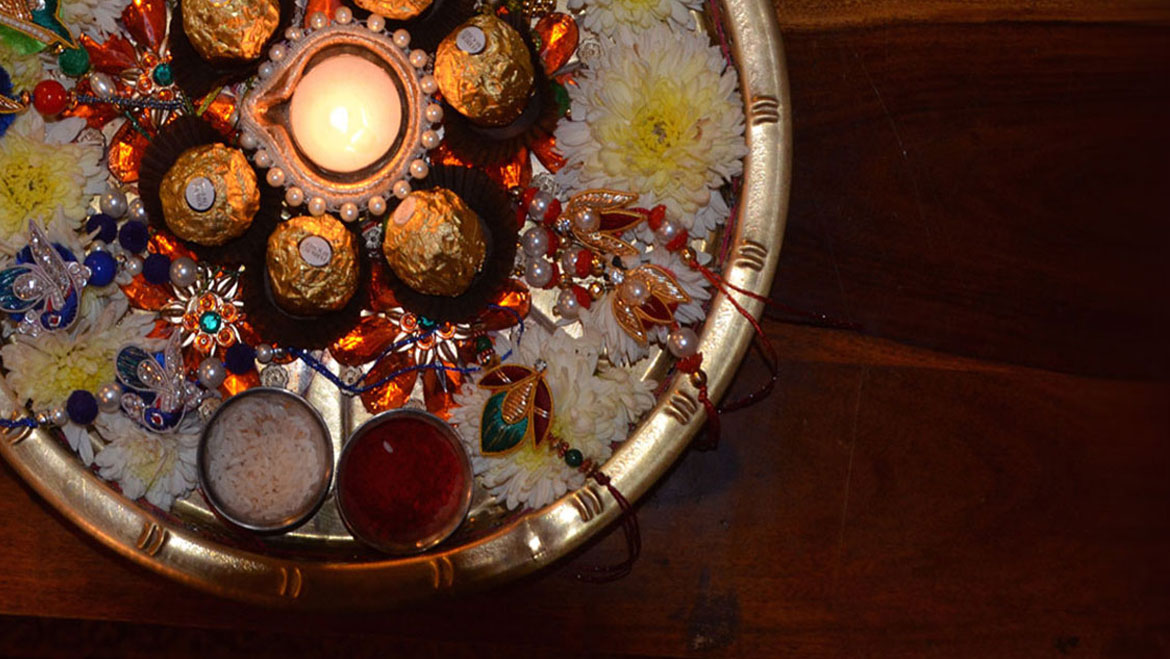 Indians have high regard for family values, and thus, there is no surprise that kids even when they become adults choose to stay with their families. Any festival in India only brings joy when it is celebrated with one’s beloved family; and when the festival itself is about celebrating the bond within a family – between brother and sister, can you imagine what significance it’ll hold then? Raksha Bandhan, an Indian festival associated with the bond between brothers and sisters and consecrated with the tying of an amulet or thread around the brothers’ wrist, is one Hindu celebration that has been able to leave a mark on other religions as well. This traditional festival dates back to the times of Hindu gods and goddesses and has more to its significance since in ancient India the Rakhi thread was not restricted to a demonstration of love and care between brothers and sisters. There is plenty that you need to learn about Raksha Bandhan, and hence, this blog can be extremely useful.

Why is it Celebrated? 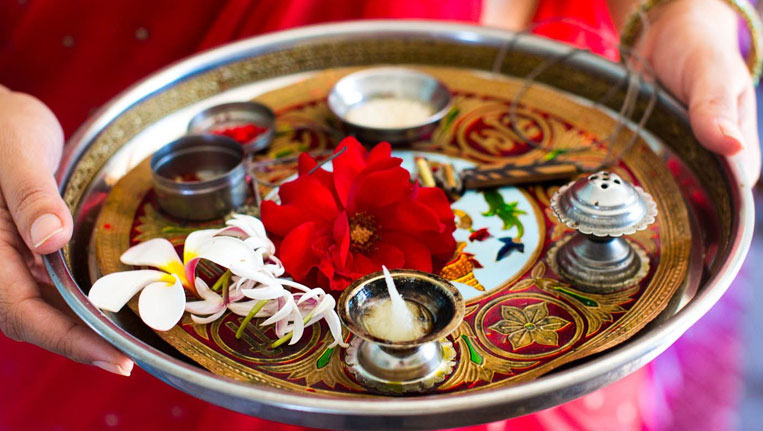 The significance of Raksha Bandhan is the sharing of the bond between a brother and sister. The age-old tradition of a sister tying a sacred thread on the wrist of her brother and in return the brother promises to protect her creates a sense of trust between the siblings. The existence of this ritual has been mentioned in various mythological manuscripts. The actual meaning of Raksha is “protection” whereas Bandhan means a “bond” and that is why when a sister ties the sacred thread, it becomes a duty of the brother to protect her.

Top Cultural Festivals in India to Witness in 2020

When is it Celebrated? 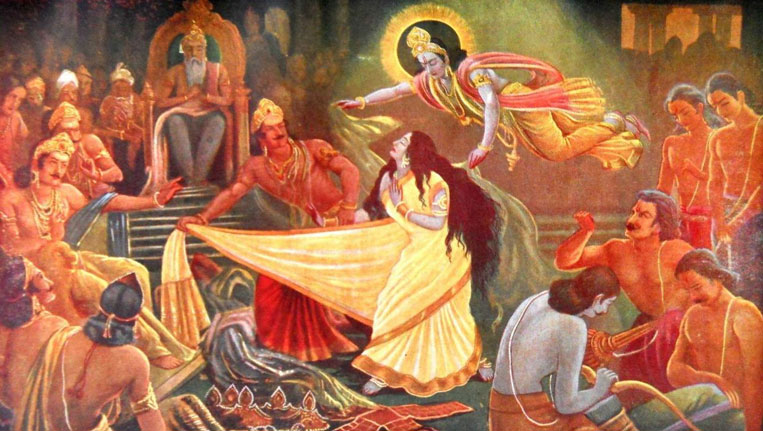 This ancient Hindu festival has many legends associated with it but few most popular are mentioned below:

The story of Lord Krishna and Pandava’s Consort, Draupadi

The first legend has its roots in the ill-reputed Hindu mythological incident in Mahabharat- Vastraharan. According to the legend, Lord Krishna once injured himself after having a war with Shishupal. On seeing him like this, Draupadi (the wife of Pandava brothers) tore a piece from the apparel she was wearing and wrapped it around lord’s wrist that stopped the bleeding. Moved by her actions, Krishna accepted her as his sister and considered the wrapped piece of cloth as a rakhi. Lord Krishna promised Draupadi that he will protect her from any harm and this promise was well-kept. When she was in dire need to be protected, Lord Krishna came to the rescue.

The Granting of Wish of Goddess Laxmi by King Bali

The legend involves Lord Vishnu and Goddess Laxmi. According to this legend, Lord Vishnu, disguised as a doorman, was protecting King Bali who was a devotee of Lord Vishnu. In order to protect him, the god stayed with the king and away from his wife, Goddess Laxmi who was in Vaikunth. Eventually, she started to miss him and wanted to be with him, so, she herself as a woman who was in need for a shelter approached King Bali. As the Goddess is associated with wealth and goodwill, the king started to prosper with her entry in his kingdom. Then on the full moon day in the month of Shravan, the woman (Goddess Laxmi) tied a sacred thread on the wrist of the king and in return wished for protection and happiness. The king asked what she wanted as a gift and promised to fulfill it. She simply pointed towards the doorman who now revealed himself. Learning the reality of the God and Goddess, the king kept his promise and asked Lord Vishnu to go along the goddess. In return, Lord Vishnu promised King Bali that he will return and stay with him for four months a year.

The Emergence of Santoshi Maa

This legend is associated with Lord Ganesha and his sons. According to the legend, the sons of Lord Ganesha- Shubh and Labh got frustrated of not having their own sister to celebrate Raksha Bandhan with. They asked their father for a sister but received a no in response. After being persuaded by Saint Narad, Lord Ganesha created a daughter from the flames which emerged from his wives – Riddhi and Siddhi. He named the daughter Santoshi Maa which meant the Goddess of Satisfaction.

The Legend of Lending Out the Holy Thread by Lord Vishnu

According to the Bhavishya Purana, a war took place between demons and gods where Indra (God of rains, sky and thunderbolts) was disgraced by demon King Bali. Concerned about Indra, Sachi (Indra’s wife) consulted Lord Vishnu. After hearing her, the god gave a bracelet made out of cotton thread and called it to be holy and asked her to tie it around Indra’s wrist. Sachi did as she was asked to and blessed the holy thread with well wishes and success for her husband. After having the thread with himself, Lord Indra went on to defeat Bali and was successful in recovering Amaravati.

Introduction and Celebration of Raksha Bandhan in Punjab

In the 18th Century when Sikh Khalsa armies introduced the term Rakhi and promised to protect the farmers from Mughal and Afghan armies in exchange of having a small share in their produce.

Maharaja Ranjit Singh who was the founder of Sikh empire celebrated the festival of Raksha Bandhan. His wife, Maharani Jindan, knew the value of a Rakhi and that is why she knew that if any help ever required, no one would say no to this gesture. So, she sent a rakhi to the King of Nepal who accepted her as a sister and gave her refuge in the Hindu kingdom of Nepal when the Sikh empire collapsed.

Story of Humayun and Rani Karnavati

According to the legend, after the death of the King of Chittor, the widowed Rani Karnavati once sent rakhi to Emperor Humayun to help her defend her kingdom from the invasion of Bahadur Shah, Sultan of Gujarat. On receiving the rakhi, Humayun immediately left for Chittor but could not reach on time. By the time he reached, the queen had already performed Jauhar and Bahadur Shah had taken over. But Humayun kept the promise and respected the value of rakhi by defeating Bahadur Shah and winning Chittor back and restoring the whole kingdom to the queen’s son.

How is it Celebrated? 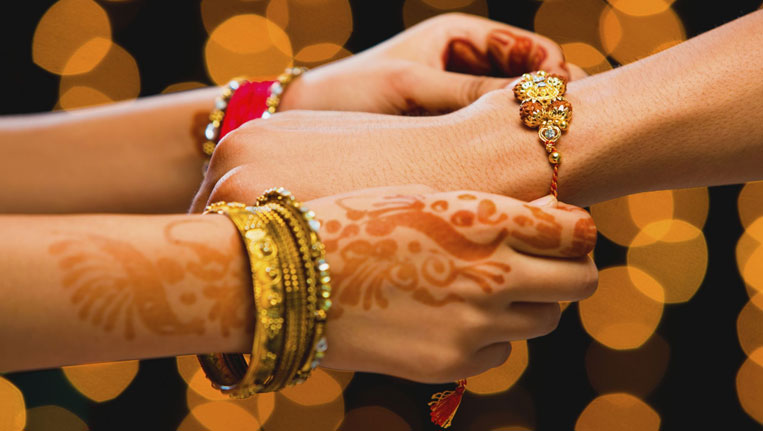 Raksha Bandhan, a popular Hindu festival is celebrated on the full moon night (Purnima) in the month of Shravan according to the Hindu calendar and August or September according to Gregorian Calendar. The festival is celebrated with the ritual of performing a puja where every family member is present. After the puja, sisters do an Aarti and puts vermilion or sindoor along with rice (teeka) on their brothers’ forehead and then ties the sacred thread/amulet- Rakhi. Brothers give gifts to their sisters after this rite. Even though this festival is celebrated throughout the country with common rituals, there are few states which celebrate it in a unique manner. Read along to know about them:

The locals in Gujarat worship Lord Shiva with the belief that he will demolish every negativity present in the world and peace will sustain.

This festival involves the locals of these states mentioned above, throwing coconuts in the sea. This ritual is a way to worship the sea and is a must followed rituals by the fishermen. During this festival, many people plant coconut trees along the banks of the rivers. After this ritual, they celebrate Raksha Bandhan with sweets made from coconuts.

Avani Avittam is a tradition followed by the Brahmins of Odisha, Jharkhand and South India. They believe that on this day Lord Vishnu helped revive the stolen Vedas. In honour, they change their Janaui or the sacred thread.

At Baba Bakala in Amritsar district, an annual fair is organised on the occasion of Raksha Bandhan.

Major Art Festivals in India in 2020

Raksha bandhan is the festival not only about the beautiful bond between a brother and sister but about the unconditional love and care we should show to each other. Everybody needs to be cared about in this world and the festival is celebrated with this belief only.

We at Tour My India, do not want you to stay away from your loved ones this Rakhi, so call us at +91-9212553106 or write us at info@tourmyindia.com and get know about the ah-mazing packages in India. Don’t be away from your family on this day instead plan a trip together and let us help you with it. Happy travelling!