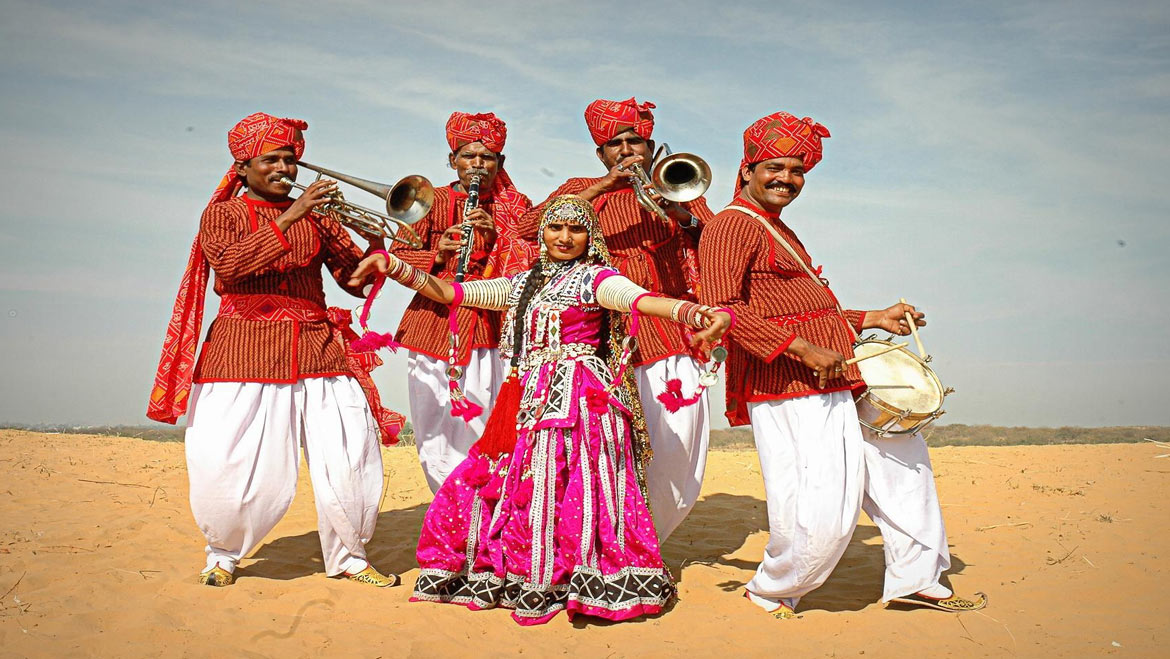 India’s rich cultural diversity is probably the greatest gift that God has ever given to mankind. Accurately mirrored in a vast spectrum of customs and costumes, India’s rich heritage has been aptly visualized by the bard and Nobel laureate Rabindranath Tagore in these lines extracted from his poem “Dispenser of the Destiny of India”, the first stanza of which has been adopted as India’s national anthem:

“We heed to your gracious call The Hindus, Buddhists, Sikhs, Jains,
Parsis, Muslims and Christians,
The East and the West come together,
to the side of your throne
And weave the garland of love.”

Standing in the 21st century if one had to inhale the beauty of India’s diversity in one breath, he shall have a Himalayan task at hand. With so much to see, feel and experience, it is advisable to explore it in the costumes and cultures of places located in these five different Indian states, each of which is unique in terms of its ethnic wear, festivities and traditions.

Leh-Ladakh: Frozen in Time and Rooted in Tibetan Buddhist Traditions 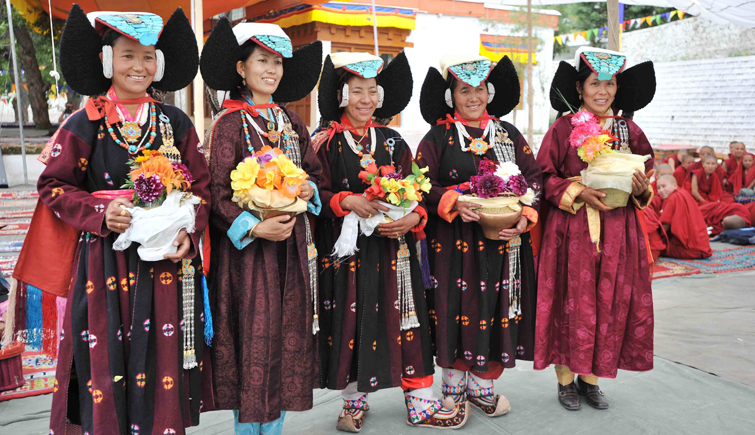 The crowning jewel of India, Leh-Ladakh, located in the state of Jammu & Kashmir, makes time stand still in the frozen and arid landscape of the Himalayas. The biting cold of the region, heavy snowfall, sporadic cloud bursts and snow caped mountains leave their imprint on the ethnic dress code of the local inhabitants of Ladakh. Men sport the traditional thick woollen robe called the “Goucha” that is fastened at the neck and tied at the waist with a sash called the “Skerag”. Women wear a similar robe called the “Kuntop” and sport a shawl on their back called the “Bok” that allows them to carry a baby or essentials of daily chores. Women in Ladakh also wear a traditional hat made of Yak wool or leather called the “Perak”. The “Perak” has three, five, seven or nine streaks of colours, depending upon the social standing of the incumbent. Nick named the Last Shangrila and also the Little Tibet, Leh-Ladakh has strong imprints of Tibetan Buddhism. A major festival is the Hemis, celebrated on the tenth day of the lunar calendar of the Tibetan month to commemorate the birth anniversary of Padmasambhava, the Buddhist monk that along with BhikhuShankarakshita is credited with establishing Buddhism in Leh-Ladakh in the eighth century.

Arunachal Pradesh: The Land of the Rising Sun in India 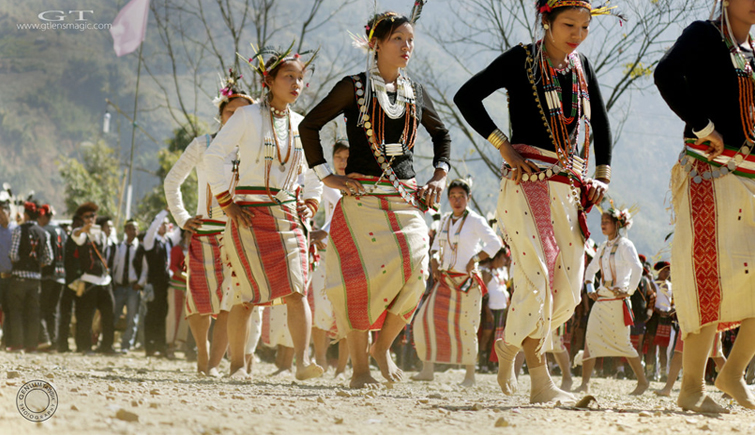 From Leh-Ladakh in the north, the garland of Himalayas stretches to the far end of the north eastern region of India. Arunachal Pradesh, known as the land of the rising sun in India is the home to 26 different ethnic tribes and 100 sub-tribes. Each tribe in Arunachal Pradesh follows a unique dress code that is rooted in its folklore, mythology and culture. As on today, major tribes in Arunachal Pradesh include the Adi, Aka, Galo, Nyishi, Apatani, Sherdukpen, Bori, Tagnis, Miji and Bokar. The Apatani tribes use fibres from trees, goats, yaks, deer, bear and human hair to create strikingly beautiful coats, shawls, skirts, sashes and loin clothes that are embellished with various forms of embroidery work. Among other major tribes the Sherdukpen males wear sleeveless silk material of knee length with edges attached to shoulders, while the women wear sleeveless dresses till knee length with a full embroidery jacket. The West Kameng and Tawang districts of Arunachal Pradesh are highly influenced by Tibetan Buddhism. The fourteenth Dalai Lama was born in Tawang. Festivals like the Torgya celebrated on the 28th day of the 11th month of the lunar calendar at the Tawang monastery draw thousands of visitors from India, Western Europe and South East Asia. The bonfire offering of Torma to bonfire symbolizes the destruction of all evil.

Rajasthan: Sagas of Steel and Sand Soaked in Royalty 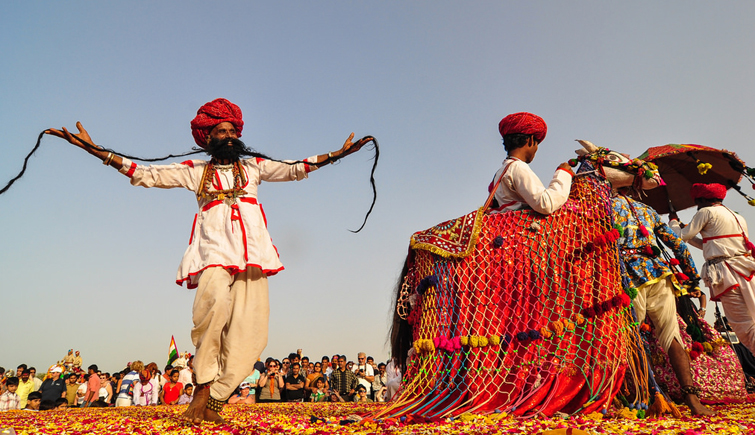 If there is any place on earth where arid sands narrate a history of valour, chauvinism and pride, it is Rajasthan. The people of Rajasthan led by the local martial race of the Rajputs love their culture, language, music and costumes. The bright colours, designs and embroideries of Rajasthani costumes are an instant hit with travellers from foreign lands. Male attire in Rajasthan consists of turbans, dhoti or pyjama and a kurta. Turbans worn by people offer an insight into their social standing and ethnic origin. People from Udaipur wear flat turbans, while those from Jaipur sport angular turbans with curved bands. Men born into the warrior caste of Kshatriya wear an Angarakha made up of cotton and can portray either a frock style or waist length. The attire of women in Rajasthan consists of a Ghaghara; an ankle length long skirt with narrow waist. Common print styles of the Ghaghara include laharia, mothra and chunari and popular colour codes include red, maroon and dark pink dotted with streaks and dots of yellow. The look becomes complete with shoes called the Jooti made of sheep, camel or goat skin. On festive occasions like Dhulandi, Diwali, Holi or the famous camel fair in Pushkar, men wear silk dhotis with a Zari border. It is customary for women in Rajasthan to wear bangles that cover their entire hands.

Most Famous Tourist Getaways in Rajasthan

Chhattisgarh: Baptized in the Name of Thirty Six Forts 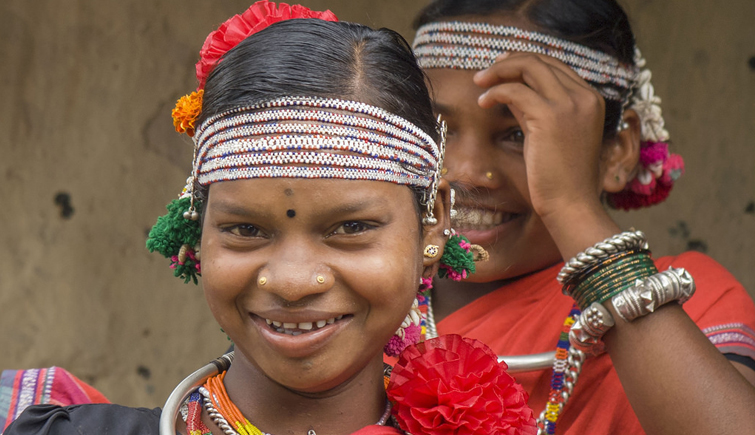 Chhattisgarh derives its name from a legend that there once existed thirty six forts in the period leading to the British Raj. The proximity of Chhattisgarh to Jharkhand and Odisha on the east and Maharashtra on the west means that the state lies in the tribal inhabited stretch of India endowed with the riches of minerals, mined and metals along with a beautiful lush green and dense forest cover. Chhattisgarh is the home of tribes who are the indigenous colors of India such as Gond, Korba, Baiga, Bison Horn Maria, Abhuj Maria and Muria that stay in and protect the natural endowments in the forest areas. Gonds; the major community in the state are known for their unique Ghotul system of marriage and tribal dance forms like the Salai, Suwa and Karma. All tribes of Chattisgarh are proud of their heritage and carry their costumes as symbols of tribal legacy. Both men and women love to wear bright and colourful ethnic tribal attire. A major highlight of tribal wear is jewellery made of metal casts, silver templates and wood. Tribal men wear dhotis made of cotton and linen and top it with head gear that reflects tribal design styles. Tribal women in Chhattisgarh wear silk, linen or cotton saris of knee length that are painted in bright colours with molten wax, called Kosa silk or the lost wax art.

Popular Tourist Attraction to Visit on Your Chhattisgarh Holiday Trip

Kerala: Backwaters, Houseboats and Ayurveda; Chicken Soup for the Soul 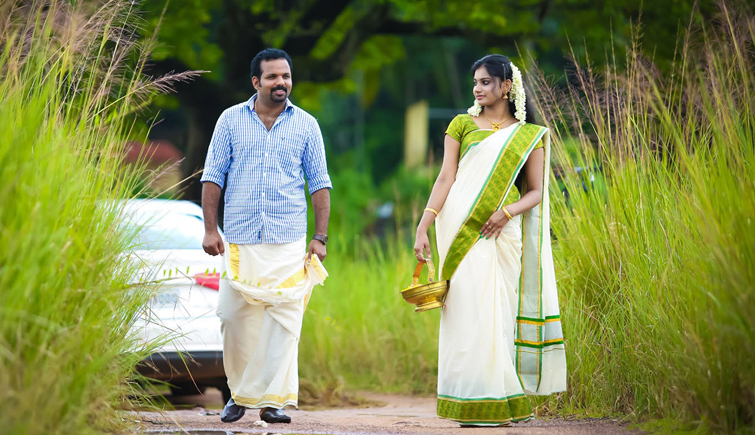 Legend has it that Lord Parasurama had recovered Kerala from beneath the seas by throwing his axe to force back the waters. Consequently, Kerala is also called Parasurama Kshteram. There is a certain alluring charm in the natural beauty of Kerala and the natural healing powers of Ayurveda. In fact Kerala is the birthplace of the age-old science of Ayurveda and the amazing tranquillity in its lush green environment augments the recovery of patients from ailments. The lazy elegance of houseboats gliding on the backwaters in Kerala, the ancient temples and a colourful festive calendar dotted with Onam, Vishu and Theyyam and the historical places and monuments that narrate the confluence of the native Syrian Christians, the Malabar Muslims and Dravidian Hindus aptly justify the rationale behind people from across the world lavishing praise on the visual treat in the God’s own country. The fact that white colour defines the most common colour code of the attires of both men and women, only reflects the peaceful ambience of Kerala. Women in Kerala dressed in the local Mundum Neriyathum, a two piece cloth worn around the waist, embellished with a golden border called Kara symbolize the simplicity of Kerala’s culture, except for special occasions like Onam when they wear heavy gold jewellery while breaking into the traditional Kalkotti Kalli dance.

Men in Kerala bear a conservative streak in their dress code and are seen wearing the Kasavu Mundu, made of cotton with a silk border for both daily work and festivities.

Check Out Best Deals on Kerala Holiday Tour Packages ] From the Kerala backwaters in down south, the endowment rich vegetation of Chhattisgarh, the red sand stone built environment of Rajputs in Rajasthan, the tribal heartland of Arunachal Pradesh that is blessed with first rays of the sun every day in India to the timeless Buddhist bliss in snow-capped mountains of Leh Ladakh, India showcases diversity in form and content like no other nation in the world. Each different culture, costume and topography is one of the many colours in the rainbow called India.