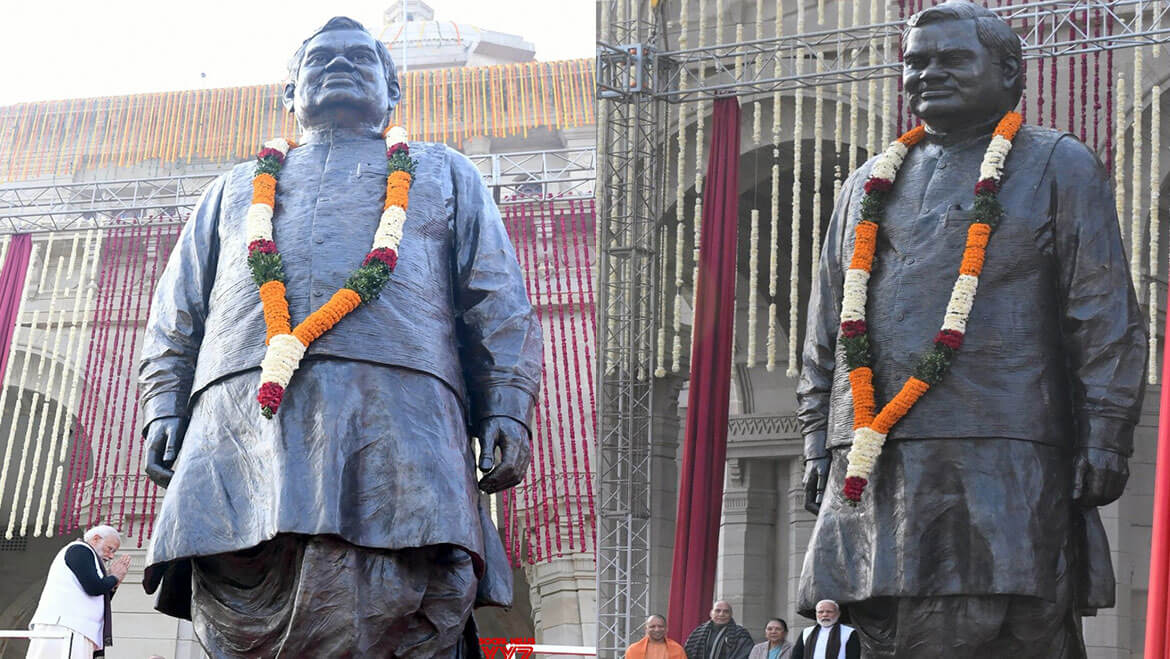 The Prime Minister of India, Narendra Modi, unveiled a 25 feet bronze statue of the former Prime Minister, Atal Bihari Vajpayee, on his 95th birth anniversary, at the Lok Bhavan in Lucknow on 25th December. Atal Bihari Vajpayee represented the Lucknow Lok Sabha constituency for five terms from 1991, and occupies a place in the hearts of its people even today. The statue is located at the entrance of the Lok Bhawan in Lucknow.

Facts about the statue 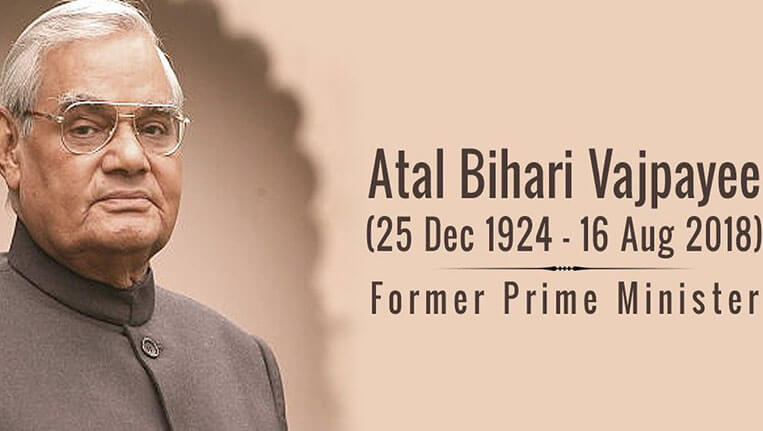 The 25 feet bronze statue of Vajpayee ji had been brought to Lucknow from Jaipur on 10th December, while the Uttar Pradesh Rajkiya Nirman Nigam was entrusted with its construction. While the total cost of its construction was 89.60 lakhs, it took almost one year to complete it.

At around 3:30 PM, PM Modi unveiled the magnificent statue of Vajpayee. It is both colossal and impressive to look at, and reflects his towering personality and magnificence. After unveiling the statue, he addressed the people present at the occasion. The entire program lasted for around 30 minutes. Along with the PM, Defence Minister Rajnath Singh, CM Yogi Adityanath and Governor Anandiben Patel were also present at the occasion.

Remembering Mahatma Gandhi: The Father of the Nation

Meet Rajkmar Pandit, the man behind the statue

The 25 feet Atal Bihari Vajpayee statue which was unveiled on his birth anniversary was created by Rajkumar Pandit, an artist from Jaipur. He said that a team comprising 65 artists built the statue in 6 months. The artist, who hails from Bihar, designs statues using various metals like brass, aluminium and bronze.

Location of the statue

The statue is located at the entrance of Lok Bhawan in Lucknow at the following address: 15, VS Marg, Lalbagh, Lucknow, Uttar Pradesh 226001.

A brief intro of Atal Bihari Vajpayee as citizen & PM 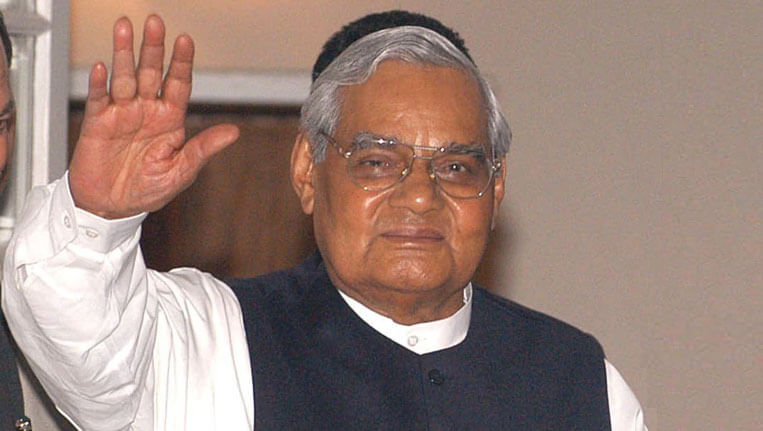 The political history of Atal Bihari Vajpayee is as fascinating as his poetry. Despite being sworn in as the 10th Prime Minister of India, his party, the BJP, failed to form a majority in the Lok Sabha. He handed in his resignation after 16 days, when he failed to garner enough support to form the government. He was sworn in as the PM for a second consecutive term on 13th October, 1999, as the head of a new coalition government called NDA (National Democratic Alliance). One of the interesting facts about his political career is that he was the only Prime Minister since Jawaharlal Nehru to become the Prime Minister with two successive mandates.

Vajpayee was born on 25th December, 1924 to a school teacher, in the then princely state of Gwalior. However, by dint of sheer hard work, determination, and an unflinching love for the motherland, he rose to become one of the greatest politicians and an outstanding statesman of the country.

What endeared him to all was his gentlemanly style of politics, which consisted of untiring persuasion and attempt to bring everybody on board before going ahead with a policy or taking a major decision. He was a democrat at heart, and this was evident in his style of functioning. It is a testament to his gentlemanly conduct that even his most vociferous opponents respected him deeply, and acknowledged his liberal outlook.

It was under his prime ministership that India conducted the Pokhran II tests. Apart from instilling a great sense of pride and confidence, it enhanced the reputation of India internationally. Besides approving the Chandrayaan-1 project, his government saw a higher rate of investment and growth, besides an impressive rate of foreign investment inflows. One of the most memorable decisions taken by the Vajpayee government was the reform of telecom policy, under which, the fixed licence fee policy was abandoned in favour of revenue sharing model. 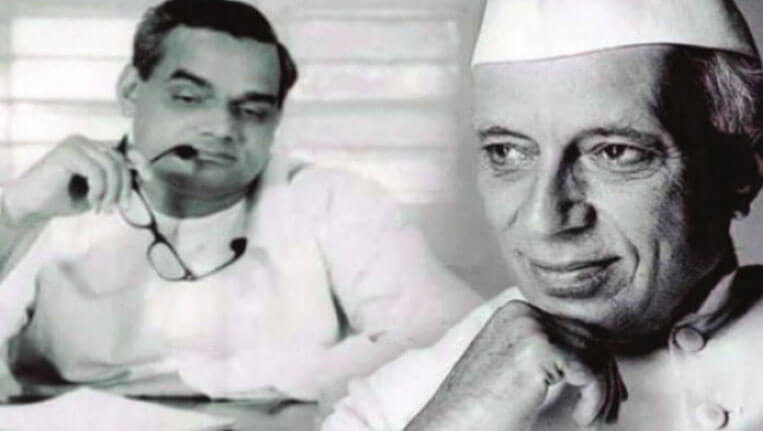 He will always be remembered for his generosity, large heartedness, sharp wit and humour. It was he who, despite being a strong critic of Jawaharlal Nehru, compared him to Lord Ram, and said, “For, like Ram, Nehru was the orchestrator of the impossible and inconceivable.” In one particular incident, as the famous historian Ramachandra Guha tells us, Vajpayee ji noticed a blank spot on the wall after the Janata government had come to power and all the portraits of Congress leaders were being taken down. Atal Bihari Vajpayee told his secretary, “This is where Panditji’s portrait used to be. I remember it from my earlier visits to the room. Where has it gone? I want it back.”

He also won the hearts of the citizens with his powerful oratory skills. One of those who was immensely impressed with his poetry was Pandit Jawaharlal Nehru, who is known to have said that he would go on to become the Prime Minister of India one day. That prophecy came true almost 40 years later in the 1990’s.

Atal Bihari Vajpayee as a Writer 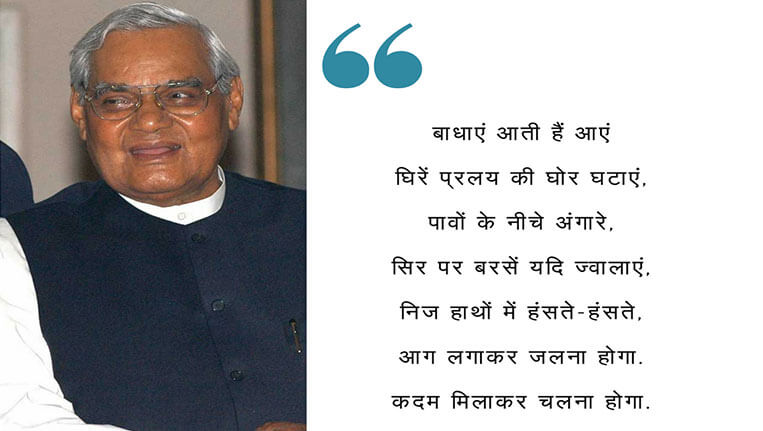 Atal Bihari Vajpayee once famously said that he was a “poet by instinct and politician by accident”. Throughout his life, he wrote hundreds of poems, besides a few works of prose. His poems stirred one’s soul with their powerful messages, while his style of reciting them always enthralled audiences. Some of his most famous works, both poetry and prose, are mentioned below. 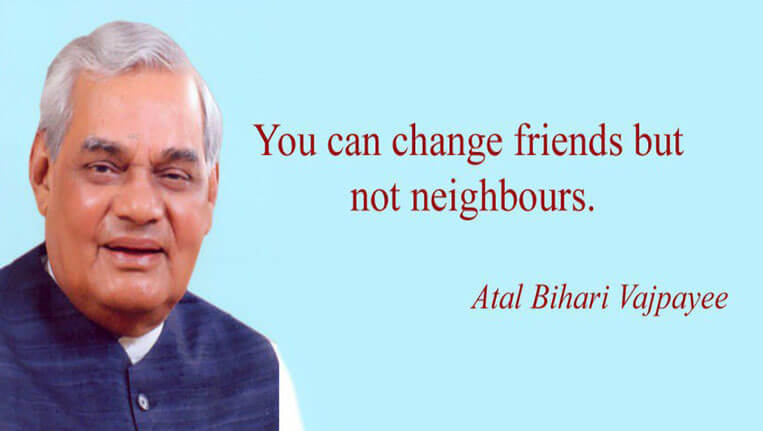 1. If India is not a secular nation, then India is not India at all.
2. It is easy to win elections by raising slogan of “Garibi Hatao” but slogans do not remove poverty.
3. Quiet diplomacy is far more effective than public posturing.
4. We are unnecessarily wasting our precious resources in wars… If we must wage war, we have to do it on unemployment, disease, poverty and backwardness.
5. You can change friends but not neighbors.
6. Hard work never brings tiredness, it brings satisfaction.
7. Victory and defeat are a part of life which are to be viewed with equanimity.
8. India is not a piece of land but a living entity.
9. I would like that no citizen of the state feels alone and helpless. The entire nation is with them.
10. No guns but only brotherhood can solve the problems.

Atal Bihari Vajpayee left behind a legacy which will always continue to inspire Indians for all time to come. They will derive their strength and inspiration from his writings, speeches and quotes. The 25 feet bronze statue unveiled by PM Modi in Lok Bhawan reflects its magnificent personality, and will attract a lot of tourists in the days to come.

Q. What is the height of the statue?

The bronze statue of Atal Bihari Vajpayee is 25 feet high.

Q. Where can we see the statue?

Q. What was the cost of constructing the statue?

The construction of the statue took around 89.60 lakhs approx.

Q. Who built this statue and how much time did it take?

The 25 feet bronze statue of Vajpayee was built by Rajkumar Pandit, along with a team comprising 65 artists, in 6 months.

Q. When was Atal ji born and when did he die?

Atal Bihari Vajpayee was born on 25th December 1924 in the then princely state of Gwalior, and died on 16th August 2018.

Q. Why is Atal Bihari Vajpayee so famous?

Q. For how many years was Vajpayee the Prime Minister of India?