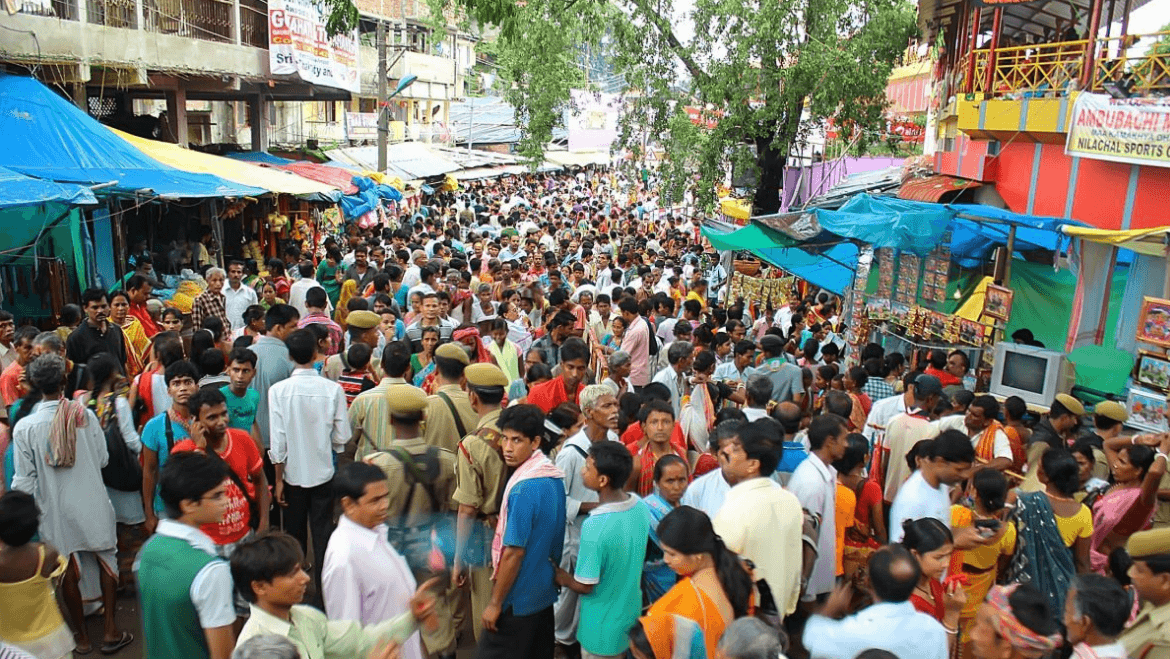 Embarking to Unveil the Enigmatic Land

With the grand arrival of monsoon, the landscape of Assam is painted with lush greenery and the water level of the Brahmaputra is filled to the brim. Farmers start preparing the bed for sowing seeds, and the fertility celebration of mother earth, Ambubachi Mela starts at Kamakhya Temple of Guwahati with grand fervor. Nilachal Parvat, an 800 m high mountain, 8 km from Guwahati Railway Station is the place where Devi Kamakhya, the presiding deity of Assam completes her annual menstrual cycle on the seventh day in the month of Aashaadha (mid of June), according to the Hindu calendar. One of the 51 Shakti peethas of Hindu mythology, Kamakhya is one of the most mystical religious sites in India. The hub of Tantrik practices and melting pot of significant Hindu beliefs welcome all sections of the society irrespective of their caste and religion. While the sadhus and sannyasinis visit the place to commune with the transcendental reality, devotees arrive to seek blessings of the caring mother Kamakhya.

When the menstrual cycle of the deity starts, all the doors and entrance gates of the temples are closed for three days. During this period no female deities are worshipped and religious scriptures are not read. The water of the pond inside the temple turns red naturally during this period and the believers of Tantra dip red cotton clothes in that holy water which is believed to be of great medicinal value. It is believed that mother earth gets polluted during this time and that is why farmers of Assam do not plough their field for three days. On the fourth day, the doors are opened after the holy bath of the deity and prasadam are distributed. For offering homage to the newly bathed deity and to seek her blessings, devotees stand in unbelievably long queues.

Recalling Myth from the Pages of Devipurana

When Sati, the consort of Lord Shiva joined the Yagna organized by her father Daksha without a proper invitation, Daksha insulted her for choosing Shiva, the poor beggar as her life partner. Sati couldn’t bear the insult of her husband and sacrificed her life then and there. When the Mahadeva came to know about the sacrifice of Sati, he was heartbroken and started his destructive dance holding the dead body of Sati on his shoulder. But, if he wasn’t stopped, it could have destroyed the earth. Seeing this, Lord Vishnu cut down the body of Sati into 51 pieces, which fall down in different parts of the world, with his Sudarshan Chakra. The genitalia (mahamudra) of the deity fell in the Garbhagriha of today’s Kamakhya where the eternal burning flame is worshipped as the symbolic presence of the deity. 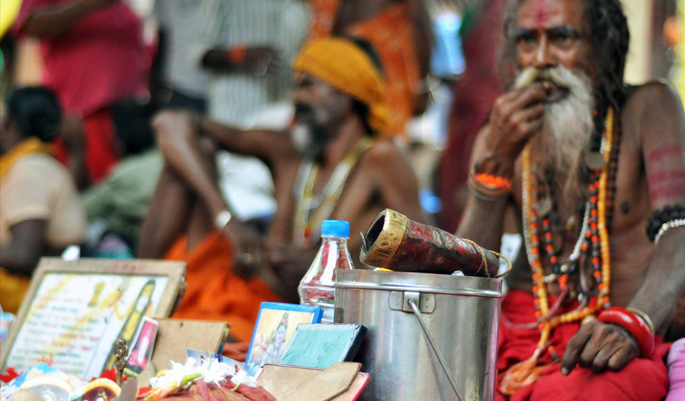 A significant centre of Shakta sect of worship, Kamakhya is centred on surprising myths and mysticism. In Kalika Purana, she is described as the incarnation of Goddess Kali and the most important deity of Tantric Cult. The description of the Goddess is explicitly found in Yogini Tantra as well as Kamakhya Tantra. She is also associated with the Dasa Mahavidyas (10 different forms of goddess Kali) and all of them are worshipped on Nilachala mountain in their separate abode. Deity Kamakhya is the amalgam of first three Goddesses of 10 Mahavidyas, i.e., Kali, Tara  and Soroshi. She is seated on a lotus flower which originated from the navel of the corpse of Shiva, who in turn is laid on the back of a lion. Lord Vishnu and Brahma are seated on either side of the deity and this is how her idol is worshipped in Kamakhya. 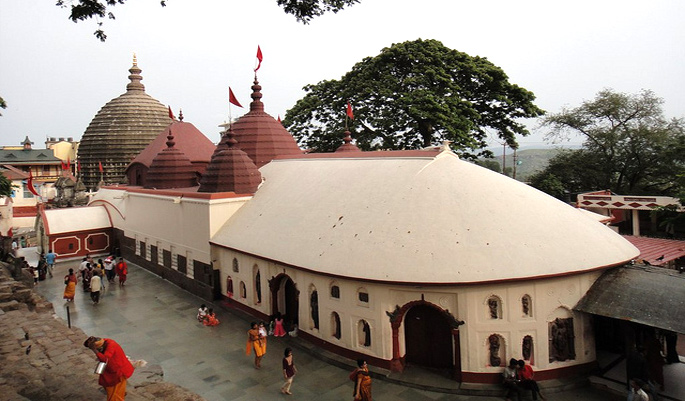 The name of deity Kamakhya has both literal as well as spiritual meaning. Literally, the meaning of her name describes her as the goddess of desire. The prayer hymn of the deity says she is the source of all things, giver of blessings, mother of the universe, destroyer of illusion and she always blesses her devotees with the desired gifts.

The Vibrancy of Mahakumbh of East 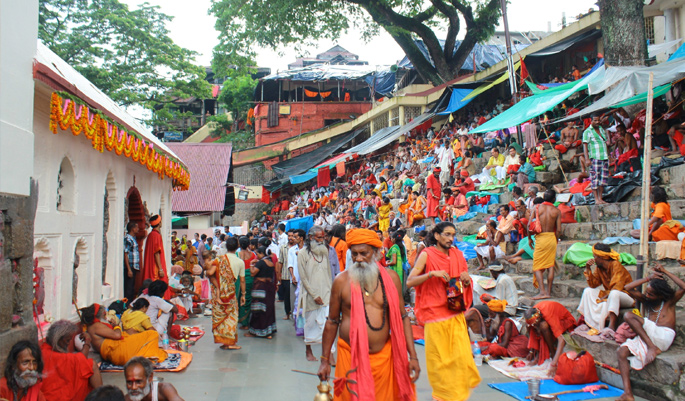 Ambubachi Mela at Kamakhya Devi Temple can rightly be described as the Mahakumbh of East. The colour and exquisiteness of the fare is surprising and stands apart from other famous fares of the country. The main attraction of the temple is the gathering of a large number of Sanyasis who depict exclusive forms of jugglery and magical experiments which are must-see elements in Ambubachi Mela. The most surprising part of this fair is the number of female sanyasis which is comparatively higher than what is observed in Indian temples. Both male and female sanyasis take Indian hemp and air of the temple premise gets filled with the smell of incense and hemp. Unlike other Indian temples, one will hardly find any discrimination on the basis of class and caste inside the temple premise. The first day, after the closing of the temple door, the fare starts and continues for four days. The number of devotees at Ambubachi Mela always exceeds one Lakh each day which is enough to signify the importance of the fare in the country. While the believers visit the temple with the utmost faith in the supreme soul, the travellers and curious souls love to explore the mysticism of the land. The scenic beauty of the temple is exceptional and one can see the instance of it at the entrance itself. 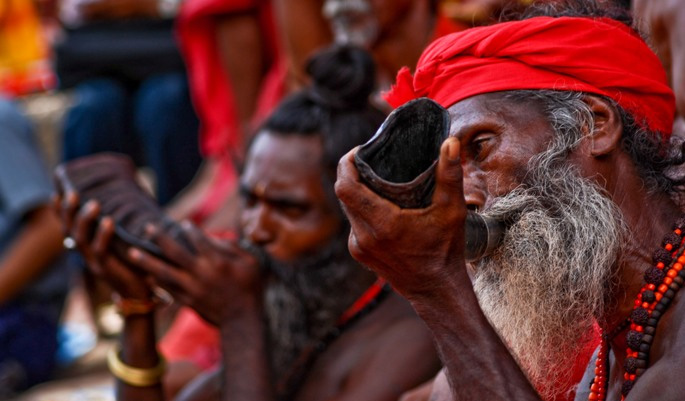 There are abundant myths associated with the formation of Kamakhya Temple. Once Narakasura, the king of Pragjyotishpur (ancient name of Assam) fell in love with Goddess Durga, who was in disguise of a beautiful young girl. The king wanted to marry her, but the deity was ready to marry him only under one condition, that is if he could build a temple for the deity within a one-night span. The king is determined to fulfil the condition was about to complete the last steps of the stairs to the temple. But it was impossible for the deity to get married to a human being. Thus she created a cock with her magical skills and the cock crowed all of a sudden. The deity refused to get married to the king and she vanished. This is how the king made the temple along with stone-made steps which are in good condition till date. Though there is a motorable tack to the temple where trackers run on the regular basis but climbing the mountain via stone steps is adventurous indeed.

How to Reach Kamakhya Temple?

The fare is the pride of Guwahati city which is centrally located in the heart of Assam and well connected with other parts of the country by air, train and road. Get down at Guwahati Railway Station and take a taxi to the temple. If you love adventure, you can ride on Mini City Service Buses that available from Nepali Mandir, the nearest stop. If you want to stay atop the hill or in a temple premise, facilities are available at affordable prices. The trackers taking you to the temple (sharing) do not take more than Rs.20.

Things to Do during Ambubachi Mela 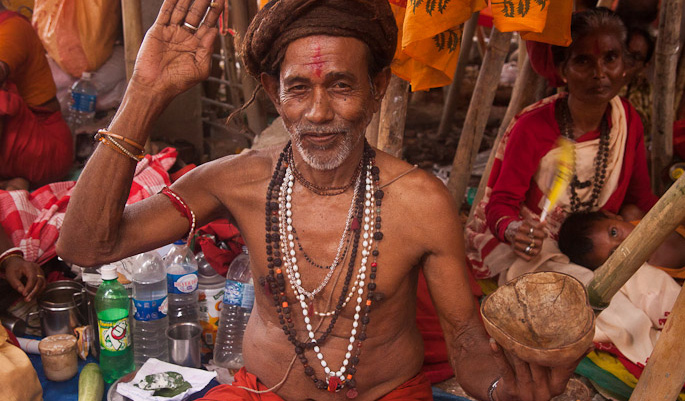 If you are religious enough, take a dip in the water of Saubhagya Kunda (pond of good luck). It is believed that the Kamsindur, a special variety of Vermilion (available in Kamakhya only) is extensively used for the wellbeing of household, businesses, and to save the individuals from evil spirits. The powder is used in black magic to magnetize enemies as well.

There are more than three temples of Lord Shiva dwelling here in different forms. The entire temple premise has enormous stone carved sculpture depicting various forms of Goddess Kali and other Hindu Gods and Goddesses. The entrance to the main temple premise has a number of shops selling different daily worshipping items. No one will force you inside the temple to donate a huge amount or you will not be misled in any way. Be aware of the monkeys, though they hardly attack people. Observe the activities of the Sanyasis practising unnatural activities. You need to think rationally and decide what to believe and what not to. Many of them are good storytellers and you will love their way of storytelling. Offer your Puja on the fourth day standing in a queue and take blessings of the deity. Do not forget to visit the cave temple where the central deity is believed to be living in the form of a black stone. One has no need to take a guided tour, as the temple premise is not at all confusing. People are helpful enough and will help you in case you face any difficulty. Buy some local artefacts made of bamboo and cane. From household materials to showpieces all are unique and you can carry some of them to your home. One needs to be good at bargaining while buying any miscellaneous items other than the Puja Samagri. Animals are sacrificed to offer ‘Bhoga’ to the deity, so if you do not want to witness the act, better avoid it.

To visit the best view of fascinating Assam, Ambubachi Mela is an ideal option. The nature God dressed up in green ornaments welcome the travelers visiting the place from across the world. Have a glimpse of Guwahati town or the magnificent Brahmaputra from the hill and be the witness to a beguiling site. Get acquainted with many unheard tales about this mystical land and above all try to mingle with the friendly and energetic Assamese locales.