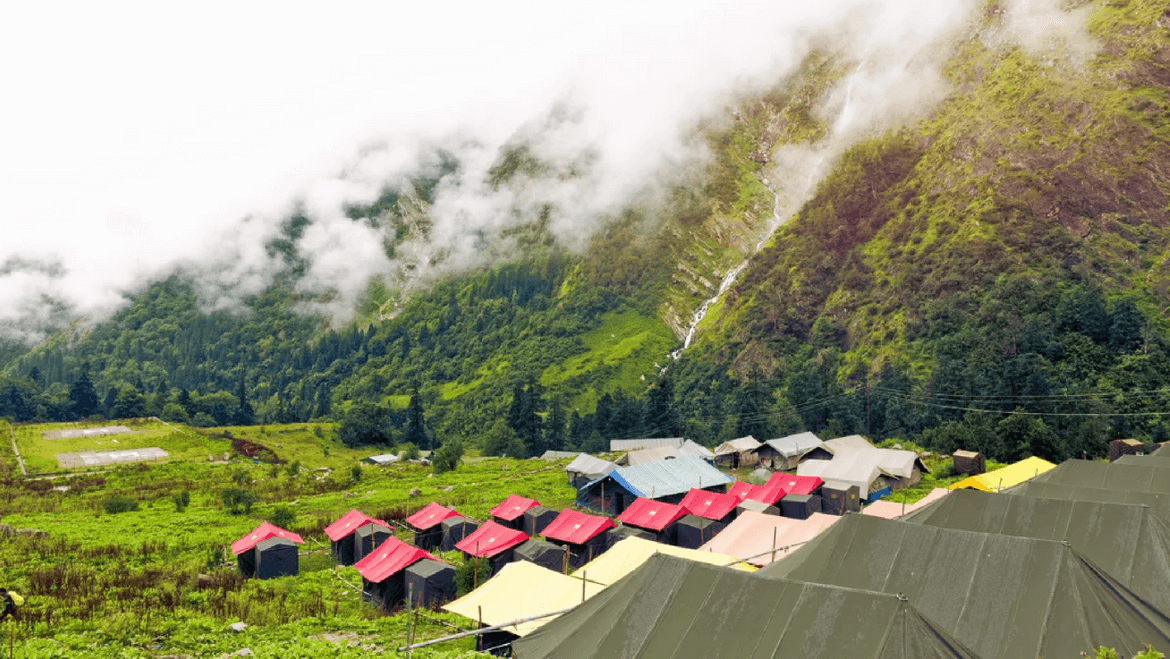 The Garhwal Himalaya has long been associated with people’s need to introspect and find peace. Besides the spiritual importance of Devbhoomi, it is being recognized for its growing adventure activities and sports. The fascinating ice capped hills at once release us from the stress of our day to day lives. The tranquility feeding the mountains… adding to the lush green meadows, dense forest, crystalline lakes and streams no doubt brings a soothing effect whenever you visit the Garhwal Himalayan region. With the growth of adventure tourism in Uttarakhand, the Garhwal Himalayan region has sprang up as one of the adventure holidays destinations in India scoring with numerous outdoor adventure activities and sports like trekking, hiking, cycling, river rafting, kayaking, canoeing, wildlife safari, fishing, bungee jumping, rock climbing, cliff diving and rappelling. Further… the region also offers the best camping sites in India like Beas Ghat on the bank of River Ganga, Dodital, Har Ki dun, Dayara Bugyal and Bedni Bugyal. Let’s check out from this article the top 15 adventure places in the Garhwal Himalayan region where you can plan your best of adventure activities as a solo traveller in India OR with your near and dear ones. 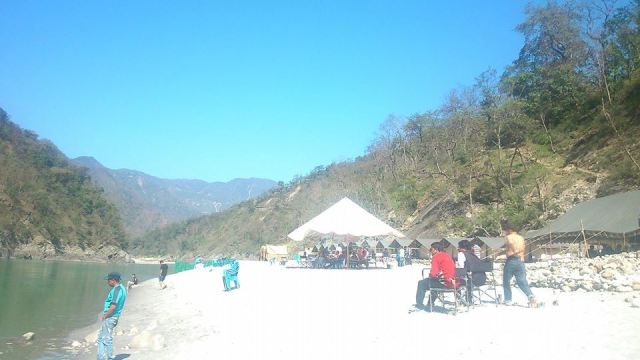 Located in the lap of the Garhwal Himalayan region with the Ganges cutting and running the valley, Rishikesh at an average elevation of 372 meters is widely noted as “the world capital of Yoga”. The serenity of this place with exciting adventure sports attracts tourists from all over the world throughout the year. White Water River rafting in the Ganges that starts from Kaudiyala and ends at Laxman Jhula in Rishikesh, having rapids ranging from II+ to IV+, is the most popular water sports in India. The 36 kilometers long rafting stretch is ideal for both the experienced rafters and amateurs. Moreover, you will get lot of camping opportunities along with several other adventure activities like bungee jumping, cliff diving, kayaking, rock climbing and rappelling.

Approximately 75 kilometers from Rishikesh, Tehri is one of the popular destinations in the Garhwal region that is noted for the confluence of the Bhagirathi and Bhilangna rivers, the site of the Tehri dam. It is also a major Hindu pilgrim site. Besides the religious significance, Tehri is also a renowned as a trekking destination and as a hotspot for adventure activities. Some of the notable treks in the Garhwal Himalayan region that starts from Tehri are Nagtibba, Sehastra Taal and Khatling Glacier. Other adventure activities of Garhwal Himalayan region like rock climbing and cycling (commencing from Tehri at 770 meters and heads up to Gangotri at 3,200 meters via Dharasu, Uttarkashi and Harsil) are also available in Tehri.

Named after C. Rajagopalachari, a prominent leader of the Indian freedom struggle, the Rajaji National Park is the abode of the several animal species and the major attraction remains the wild elephants. Other species like tiger, panther, different types of deer, wild boar, goral, Himalayan black bear and sloth bear and several bird species are also spotted. The Rajaji National Park spreads over 820 square kilometers approximately and offers a rich bio-diversity combining the Chilla Wildlife Sanctuary and Motichur Wildlife Sanctuary. The park is open from mid of November to mid of June and the authority organizes several wildlife safaris in Rajaji National Park. It has an easy access from Haridwar, Rishikesh, Dehradun and Kotdwar.

Located approximately 24 kilometers from the popular hill station of Mussoorie, Dhanolti is one of the ideal hubs for trekkers. It is also one of the leisure destinations in Garhwal for several outdoor recreational activities like picnic and camping. The panorama of the peaks like Swargarohini and Bandarpunch is clearly visible from Dhanolti. Tucked in the midst of a quiet environment at an altitude of 2,286 meters… Dhanolti is the gateway to Surkanda Devi, Chandrabadni and Kunjapuri temples. Other popular trails via Dhanolti are Nagtibba and Kempty Falls. Adventure activities like horse riding and mountain biking are also possible in Dhanolti.

At an altitude of 3,600 meters lies the beautiful Valley of Flowers National Park that houses many exotic flowers like Inula, Himalayan whorl and Cobra Lily. From orchids to poppies to daisies… one will be astonished and lost to observe the amazing varieties of flowers. It is a world heritage site that is a part of the Nanda Devi Biosphere Reserve. It is said that the scent of flowers is so strong that one can even faint. No wonder… the locals believe that fairies used to dwell here. The trek to Valley of Flowers starts from Govindghat, which is close to Joshimath. One has to go along the river Lakshman Ganga. Ghangria, which is one of the notable camping sites in the Garhwal Himalayan region, is the gateway to Valley of Flowers… from where the trek is only 3 kilometers.

Located at an elevation of 3050 meters, Auli is one of the best skiing spots in the Indian Himalayan region that has received a worldwide fame. GMVN provides modern ski equipments and certificates also. The Auli – Kuari Pass Tapovan trek via Gurson is one of the popular treks in the Garhwal Himalayan region that you can further add to your itinerary on your adventure holiday in Garhwal Himalaya. Nonetheless, the Gurson Bugyal and Kwari Bugyal are ideal spots for a hikers and travellers seeking for camping in Garhwal. The Chattrakund and Chenab Lake are two major attractions in and around Auli. The panoramic view of the farfetched snow capped peaks – Chaukhamba, Neelkanth, Gauri Parbat, Hathi Parbat, Dunagiri and Nanda Devi – adds a spiritual spectacle to your eyes.

At 2,680 meters, Chopta is the gateway to Tungnath Temple, which is the highest seat of Lord Shiva. This remote valley is famous for its pristine natural beauty that is surrounded by an alpine forest of Pine and Deodar. One can capture a breathtaking panorama of several Himalayan peaks. The Chandrashilla, Tungnath and Devariyatal are some of the notable treks that commences from Chopta. The trekking routes involves going through jungles, meadows and small villages. The journey becomes exciting for bird watchers as the region is a home to several alpine and migratory birds.

Located above the Yamuna valley, Chakrata is a small town that is a perfect hub for adventurous holiday trip in the Garhwal region. Dotted by thick deodar forest with a backdrop of a section of snow clad Himalayan peaks… Chakrata is noted for snow viewing. Tiger Falls, ancient temples and meadows are the major attractions in Chakrata. The destination is ideal of family camping, school camping and corporate camping as Chakrata is noted as one of the best places for adventure camping holidays in Garhwal Himalaya.

It is a scenic village that is situated on the bank of River Bhagirathi and is notable for several apple orchards and winding roads. Trek to Chitkul via Lamkhaga Pass and passing through the dense alpine forest of Juniper, Deodar and Bhojpatra is one of the best adventure activities that you can go for from Harshil. The dramatic climb to Lamkhaga Pass is an interesting part in the journey. If you are lucky enough you may come across ibex, fox and several alpine birds. Further, an escape to Harsil allows you to experience the folk lifestyle of the Bhotias and the tranquil ambiance makes it perfect for a meditation and yoga holiday.

Located at 3,038 meters, Dayara Bugyal offers a breath taking view of the farfetched Himalayan range. The trek route commences from Barsu village. The major attraction remains the Barnala Tal, a small natural lake that is surrounded by Oak trees. There is another starting point from Raithal village. During the winter season, Dayara Bugyal is also notable as one of the best ski destinations in India… having moderate to difficult ski slopes. The ski trip begins from Bhatwari via Barsa to Dayara Bugyal.

Dodital is one of the prominent freshwater lakes in the Indian Himalayan region that is located at an altitude of 3,024 meters. According to a legend, Lord Ganesha chose this place as his abode. It is also a common destination for fishing. The gentle trek to Dodital is approximately 21 kilometers that commences from Sangamchatti, few hours’ drive from Uttarkashi. Dodital is a very popular location for family camping and school camping. Bebra, is which 9 kilometers from Sangamchatti, is one of the best places for camping in the Garhwal Himalayan region.

Located at an elevation of 3,354 meters in Chamoli district, Bedni Bugyal is considered as one of the most fascinating alpine meadows. It offers best of view of Trishul Parvat. The trek to Bedni Bugyal commences from Lohajang Pass and is one of the easy treks in the Garhwal Himalayan region. The major attractions in Bedni Bugyal are Bedni Kund that holds a great religious importance amongst the locals; Ali Bugyal, which is another sprawling meadow at an elevation of 3,300 meters; and Wan village that is the last village en route Bedni Bugyal.