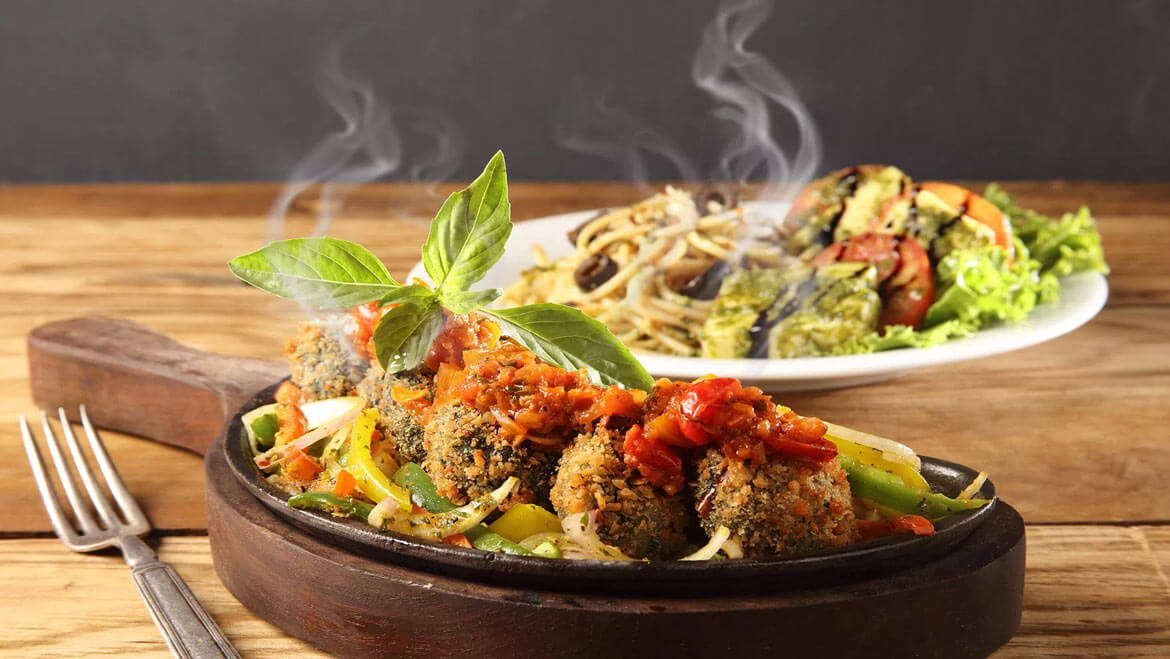 You may be a keen traveller who roam place to place and ponder the vast history of India, dig into the potpourri of nature, capture the panorama of the Indian Himalaya and splat into the wavelet blues. But what about the mouthful alleys that burps-up the culinary tourism in India?

The Indian culture having its own international tag is a fusion of hundred different languages and 8 different religions that one can easily observe from hundreds of Indian festivals and thousands of recipes.

There is always a war between the South Indian and North Indian galleys, whereas the west and east slurp the spices. Wherever you go, the taste changes and it follows. Travelling in such a montage you cannot leave behind to savour the flavours of Bengal. The mouthful dishes with spiciness and desserts with syrupiness from the buffet of Bengal JUST REMAINS a foodgaze to every traveller stepping in Bengal, the land of melting pot of diversity with history, culture and topology. Tourism in West Bengal is more of spending a culinary holiday in India that stirs with varieties of vegetarian and non – vegetarian dishes.

The Bong appetite in me…

I travel a lot and more destinations are left to cover and explore. The people I meet while travelling I introduce myself to them as a person from Kolkata, the capital city of West Bengal, and thereafter, I get a tag instantly as ‘machh’er jhol’ OR ‘machhli’ (fish curry). L But guys West Bengal is having oodles of flavours, which are much more appetizing than ‘machh’er jhol. And if you talk only about preparation of machhli (fish) … you may end with the taste but cannot put an end to the varieties. Still from the harbour to kitchen and ocean to dining table, as a traveller, I will always go for ‘Bhetki (barramundi) machh’er paturi’, ‘ilish (Hilsha) machh’er jhol’, ‘koi machh’er kalia’, ‘chingri (prawn) macher malaikari’ and ‘pomfret macher jhaal’. I’m sad that the veggies cannot have the fun to savour such cuisines but the culinary galley of Bengal also brings a variety of green cuisine.  If you ask my pick of taste… I will talk about ‘Potol’er dorma’ (stuffed parvel/pointed gourd in coconut), ‘shukto’ (mixed veg with 5 different vegetables), ‘aloo posto’(potato in poppy seed paste), ‘Shaag Begun Borir Ghonto’ (spinacho brinda bell curry) and ‘phool kopi’r dalna’ (cauliflower light curry).

So whenever you are making a trip to West Bengal don’t forget to savour one of the 10 flavours from the culinary galley. Savour the taste and escape to a rural getaway… visit the hills of Darjeeling and sip the flavor of Darjeeling Tea, steer to the dense of North Bengal, drive to the cultural diorama of Bolpur, Bishnupur and Belur AND experience the clamour of Kolkata. West Bengal Travel and Tourism welcomes you!

Let me now share my taste of 10 best cuisine of Bengal. Also to note that taste varies from person to person. These are my picks… 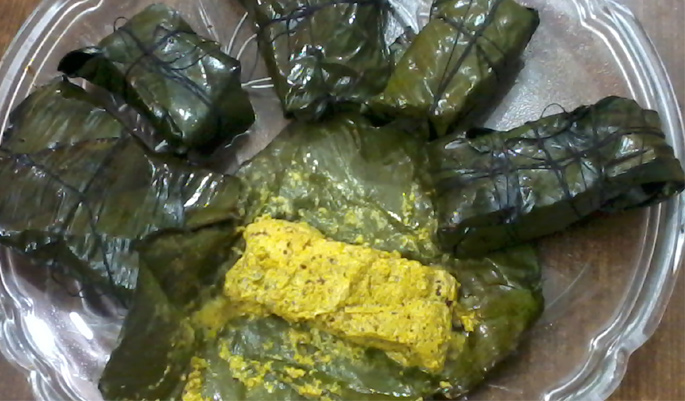 A mouthful, cushy like paneer and masaladar (lot of spice) delicacy that you won’t miss it if you are attaining a Bengali wedding ceremony. Bhetki is every bong’s sweetheart. Even people who don’t like to have fish that much, likes Bhetki just not because of its flavour and culinary taste but as the fish is having a small spine and a serrated flap above the origin of the lateral line. In a simple way to say… less bones and so easy to eat. Bhetki machh’er paturi is mostly served wrapped in banana leaf with mustard paste and cooked in steam through slow cooking. The ingredients generally used in preparing bhetki mach’er paturi are grated coconut, mustard seed paste, green chili paste, salt,turmeric powder and mustard oil. I hope you all will relish this simple wedding platter. You can add your own flavour to it with lemon and salt. This is how it looks when wrapped in banana leaf. 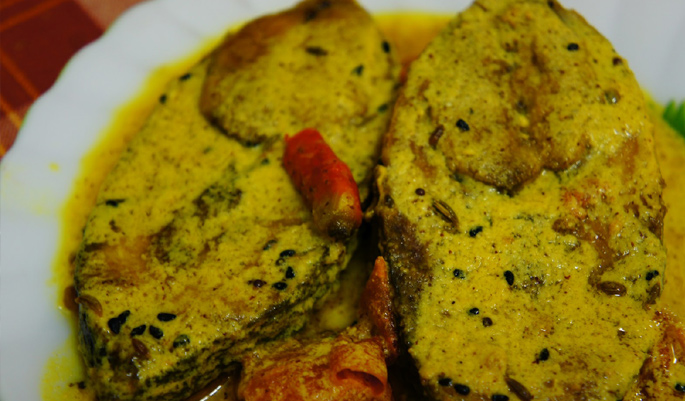 The silky, shiny and smooth scales, talking about Hilsha a.k.a. Ilish aren’t an easy catch. This species of fish is having its own way to play in the deep sea and river water. From the fisherman’s net to our taste bud… ilish has its own flavour. Even a simple fry, without stuffing any spice, brings water in our mouth. That’s YUMMY and SLURPY but it becomes finger licking when it is dressed in culinary preparation. If you knock any bong door in the monsoon and come across ‘Ilish machh’er jhol’ placed on the dining table… don’t be surprise as it is a usual meal. ‘Ilish machh’er jhol’ is usually cooked with mustard paste (grinded mustard seeds) and served in a rich way. The ingredients used in Ilish machh’er jhol are mustard seeds, green chilli chopped, salt, nigella seeds, red chilli powder, turmeric powder and mustard oil.

A very rare cuisine that will stir your taste buds and leave appetizing burps knocking your mouth. ‘Koi maachh’er jhol’ is a typical Bengali preparation that you won’t find easy to eat. A non – veggie having Koi first time may be scared of its hook like sharp bone but when you take it into your mouth… the taste simply remains for the whole day. The Koi fish, which is often dubbed as climbing perch, belonging to carp family, is a hardy small fella and is cooked with such dedication that some mingles gladly with spring onions, some has undying love for potatoes, others seems to be so happy with veggies like eggplants and cauliflowers. These small fishes always bring multitude of interesting dishes to the dining table which every Bong love to cherish. Here is a culinary preparation of Koi fish.

Chingri (prawn) macher malaikari…  Lick your fingers at any occasion! 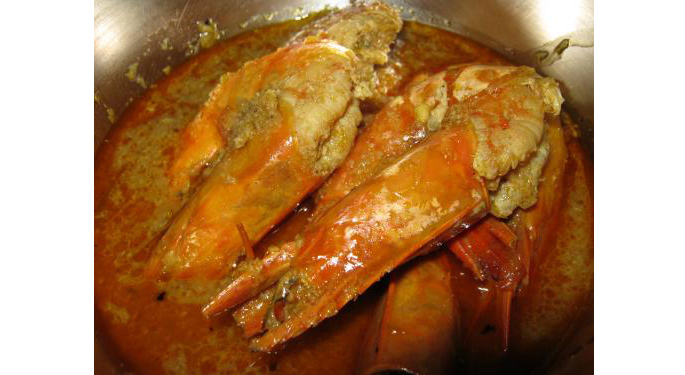 Undoubtedly, Chingri Macher Malai Curry or Chingri Malai Curry is among one of the favourite Bong recipes. Thick gravy with coconut paste cooked with lobsters, prawns or shrimps is generally an occasional dish especially on Holi, Noboborsho or Poila Boisakh (Bengali New Year), Mahalaya, Durga Puja, Kali Puja and other occasions. Be it lobsters, prawns or shrimps, the bong kitchen find several ways to cook. There are traditional dishes where shrimps are cooked with bottle gourd (lau chingri) or cabbage (badhakopir ghonto chingri mach diye). Sometimes these are steamed with mustard paste in a banana leaf parcel (chingri paturi), whereas sometimes these are cooked with chopped banana flowers (mocha chingri) or cooked in an awesome chutney base (chingri macher chatni)! 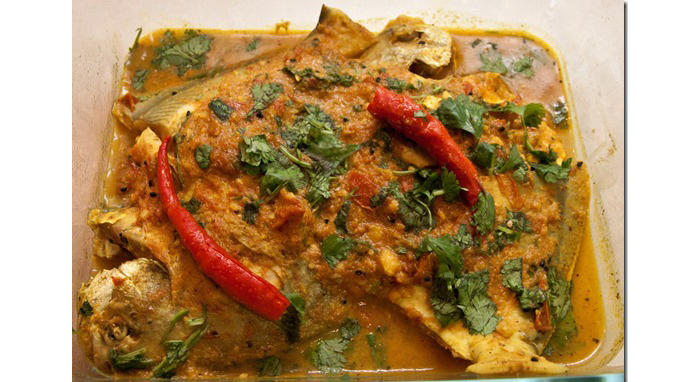 It is served in different forms, barbeque, deep fry and thick curry. Although it is easy to cook but is one of the pricy recipes you may come across. Worth trying! Your culinary holiday in West Bengal cannot be fishful if don’t try out Pomfret machh’er jhol or fry. Fried Pomfret dressed with spices is a real savour having with hard drinks. 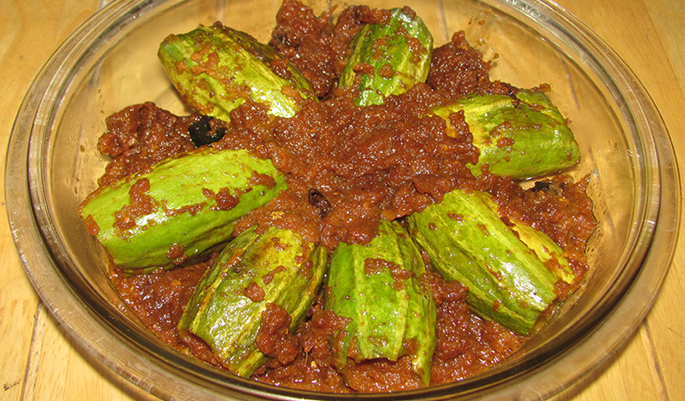 A unique culinary preparation that is loved by all Bengalis… this veg dish has to be prepared and cooked with great dedication and patience. ‘Potol’er dorma’ is often stuffed with coconut or paneer or any other veg ingredients, mixed and dressed with spices like red chilli powder, garam masala, turmeric powder, broken cashew nuts, cumin seed powder, dried mango powder  and salt. Usually it is served dry with pulao or simply with rice. Some non – veggie do stuff it with prawns and shrimps and with more spices… all the way ‘potol’er dolma’ is very common if you knock any door in West Bengal. The culinary preparation of potol’er dolma. 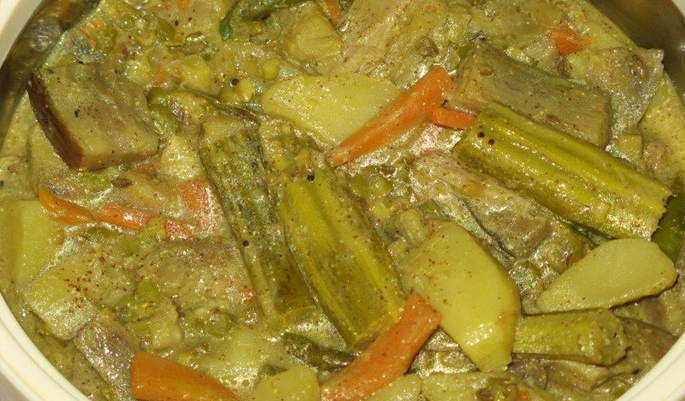 Well, it’s one of my favourites. A traditional Bengali recipe… a classic melange of vegetables cooked with poppy seeds and mustard paste Shukto is a cuisine that is prepared without any kind of spice ingredients other than salt and sugar. Yes! This recipe stands unique as it is sweet and palatable and having hygienic value. However, it derives its distinctive flavor from one vegetable in particular, which is Bitter Gourd or Bitter Melon, also known as Karela in Hindi. It is a vegetable stew or you could also call it a bitter gourd stew or bitter melon stew. Shukto is served generally as the first item or starter before going for the main course. The common vegetables that are used in preparing shukto are papaya, raw banana, brinjal, drum stick (sajne data) and potato. The culinary preparation of shukto…

Posto or Poppy-Seeds or KhasKhas is a popular ingredient for several dishes in Bengal, particularly in the districts of Bankura, Birbhum etc. I don’t know whether I loved it because it “induces euphoria and sleep” but I tell you it’s yummy and if you doze off to sleep after the above lunch that’s bliss too. Alu posto is usually served with musuri’r dal as a starter. The culinary preparation of Alu posto… 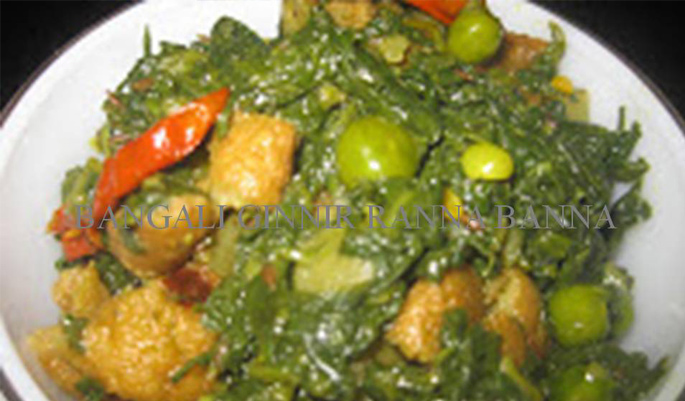 A Bengali delicacy that is prepared with spinach cooked with brinjals and nuggets. ‘Shaag Begun Borir Ghonto’ is also served as a starter before one goes for the main course. It is yet another mouthful and spicy cuisine that is dressed with spices like fennel seeds, cumin seeds, mustard seeds, ginger – garlic paste, onion paste and salt. The culinary preparation of Shaag Begun Borir Ghonto…

It is yet another traditional Bengali preparation of Cauliflower and Alu usually served with rice or roti that you will find in each and every restaurant. It depends on your taste how you would like to have it… either spicy or sweet. Other than the common ingredients the culinary preparation becomes scrumptious when you add some bay leaves. The other ingredients are cooking oil, green peas, turmeric powder, ginger paste, cumin seeds, green chili and sugar. This is how it is served… simple yet palatable

Most of the above veg cuisines are homely. But to savour the original flavour of Bengal don’t step into posh restaurants rather road side dhabas or shacks serves the best at affordable. If you still ask me some of the popular restaurants in Kolkata that serve unique Bengali cuisines then I will pick 6 Ballygunge Place, Sholo Ana Bangali, Tero Parbon and Bhojohori Manna. Wish you a happy culinary holiday in West Bengal. The wedding season is knocking so don’t miss Bhetki machh’er paturi.