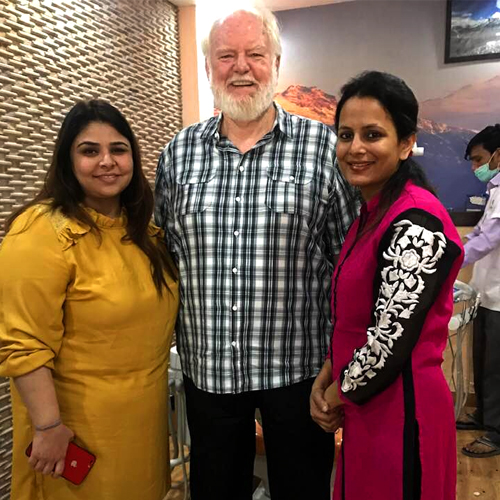 Laurie Knight is a 70-year-old Australian, who wished to undergo whole mouth restoration to be able to eat properly with no pain and to improve the aesthetics.

While browsing for the options online, Laurie discovered TMI Medical Tourism. The dental treatments like single or partial implants are very expensive in Australia, compared to those in India; hence Laurie considered India for the procedure. Moreover, he and his wife Frances, always wanted to visit India and experience its culture.

Laurie requested a quote after going through the website. The Medical Advisor responded to Laurie’s request. He was asked to send the X-ray of his mouth and other details.

Mr. Knight wished to undergo the conventional complete mouth restoration. But the conventional implants need interim dentures and probably a second procedure to fix the abutment over the implant. Also, the whole procedure requires about 6 months to one year. To overcome these drawbacks, the Medical Advisor recommended going for basal implants, which could be implanted in a few days of time.

We provided a customized plan to Mr. Knight which included the treatment plan, options for hotel booking, and leisure tour. Then an estimate of the expenses was proposed. The total expenditure for the procedure was within Laurie’s budget, and he decided to travel for the restoration procedure. Laurie and Frances wanted to have the procedure first and then go on the leisure tour in Delhi.

Laurie and Frances landed in India on March 3, 2019; their 14-days-trip was well-planned. They were welcomed by the TMI team and escorted to their hotel safely.

The next day, the team had arranged a consultation for Laurie with Dr. Neha of Dental Hub, Gurgaon, India. After examining Laurie’s mouth, the doctor said that he had 16 good teeth, which wouldn’t require complete mouth restoration. But Laurie insisted to go ahead with the procedure. He had a strong basal bone, good enough to undergo basal implants. The doctor suggested approximately 10 basal implants instead of the usual 4x4 implants for the procedure.

During the discussion, Laurie mentioned that he is a cardiac patient and has an implantable cardioverter defibrillators (ICD) pacemaker. This pacemaker posed a challenge, as the anesthesia given during the procedure could interfere with the ICD implant and increase the risk of heart attack, heart failure, and other cardiac events. Dr. Neha said that a cardiac clearance from a cardiologist was required and adjustments had to be done in the pacemaker by an expert from the respective company.

The TMI team coordinated with the specialists required to evaluate Laurie’s heart status and the pacemaker settings and arranged a meeting on the following day. A cardiologist from Pratiksha Hospital, Gurgaon, thoroughly analyzed Laurie’s cardiac condition. Mr. Pranav, an expert from Boston Scientific, also evaluated the ICD settings. On the next day, Mr. Pranav made the necessary adjustments in the pacemaker, which required 3 – 5 hours. Laurie was then ready to undergo the procedure.

Before the procedure, X-ray of the mouth and CT scan was performed to evaluate the bone structure of the mouth.

The complete tooth extraction was performed on March 6, 2019. Laurie was advised to go on a soft diet for the next few days. He was also prescribed gums astringent to ease the pain. A follow-up was done on the next day to check for any bleeding in the mouth. As there was no sign of bleeding, the measurements of the bone were noted. The next step was implanting the prothesis, which should be performed within 72 hours after tooth extraction. The doctor’s team worked overtime to ensure that the prosthesis was ready within 72 hours. On the third day, the prosthesis was positioned in place successfully. During the follow-up, the patient’s blood pressure and other vitals were carefully monitored.

The entire procedure was a successful one. The doctor instructed the patient about diet and medications to be taken for a good recovery.

Laurie and Frances went on the leisure tour after the procedure was completed. They visited several monuments in Delhi, Kingdom of Dreams and shopped in the Delhi market. Also, they went on a day’s trip to Taj Mahal, Agra. Laurie could enjoy his tour without any pain; he was able to smile to the fullest.

Laurie and Frances stayed for another week before returning to Australia. They are still in contact with the TMI team and are glad that they had an opportunity to visit India.

TMI wishes a long, healthy life to Laurie and Frances, filled with smiles. It was a pleasure serving them!