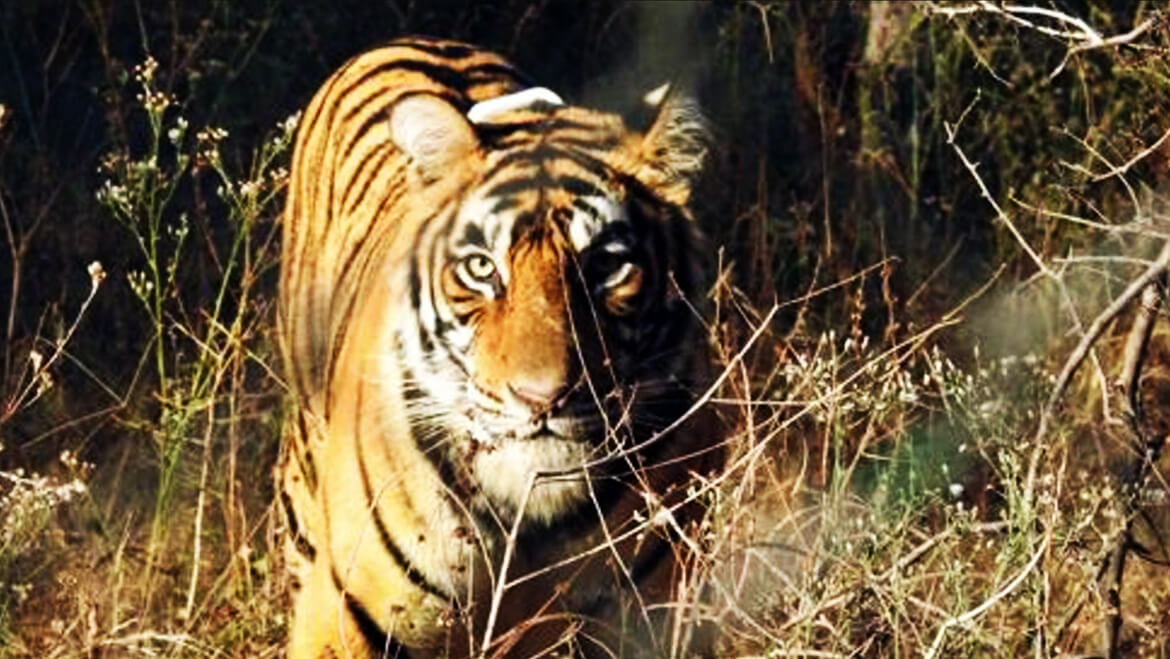 In a mind-puzzling incident, a tigress was killed by Forest Officials in Tipeshwar Wildlife Sanctuary in Yavatmal district. This incident came to light when it was reported that the Tigress T-4 died after she was tranquilised during a rescue operation.

The seven to eight years old tigress was previously injured in the neck region by a nylon wire snare in September 2017. However, the authorities couldn’t trace the elusive tigress so that her treatment could begin. She was again spotted in May 2018 and it was visible that her neck injury had worsened.

India Mourned 49 Tiger Deaths in 2018, Most Were From Madhya Pradesh

What’s the story about?

In 2017, the tigress was cut by barbed wire, however, when authorities got to know about it, they couldn’t track her. For the next 8 months, the tigress was elusive but when she was spotted in May 2018, it was clearly obvious that the neck injury was taking a toll on her. Additional principal chief conservator of forest, Nagpur, Sunil Limaye said that on March 17, the tigress was spotted again in the region and the divisional forest officers decided to tranquilise her to begin the treatment procedures.

However, this is where things went a little haywire. The dosage of the tranquiliser ended up being fatal for the tigress. This incident highlighted the importance of proper planning and also highlighted the flaw in the system of tiger rescue in national parks.

Where did it go wrong?

This incident highlighted one minor mistake in calculation. Before tranquilising a wild animal, a proper dosage of tranquilisers are made. This depends on the type of animal, its age and weight. The dosage made for T-4 was not in accordance with its actual weight, rather the dosage was meant for a healthy adult tiger. However, the condition of tigress had deteriorated over time. She had lost a lot of body weight and she was clearly weak. The dosage for an adult tiger proved too much for her. In the postmortem, it was revealed that the injury was worse than they initially assessed and maggots had formed around the neck area. The official statement read that the tigress succumbed to her neck injuries after being tranquilised. The detailed report would be out soon.

Tiger Deaths a Cause of Concern in Maharashtra

The curious cases of Tiger deaths in Maharashtra

The death of Tigress T-4 takes the tally to 6 reported tiger deaths in the state just this year alone. Maharashtra in the year 2018 also witnessed deaths of 14 tigers, raising serious doubts over the efficiency of the state in preserving the endangered species. On the condition of being anonymous, a forest official said that the tranquiliser dose could have been higher than required. The dose was not meant for a weak tiger or tigress. This entire incident happened in the absence of any senior forest official. These cases of tiger deaths every year goes directly against the plan of preserving tigers in the state and the country.

The obvious question that arises now is that, can we with certainty claim that the tiger conservation program is a success? If we just look at the numbers, the conservation program seems to be a monumental success. From 1400 odd remaining tiger to 2500+ by the year 2018, the efforts have shown a positive result. However, if we go into deeper analysis, we realise that the program is not a perfect one. In the last 10 years, the country has witnessed the deaths of more than 380 tigers. While we are adding more and more tigers to the count, there has been a constant hurdle of tiger deaths in India.

The reason for the deaths may vary from poaching, retaliation of angry villagers to territorial wars and deaths because of accidents to lack of proper treatment. Whatever might be the reason, this has highlighted a basic problem in the conservation policies.

Save The Tiger: India Has Killed 384 Tigers in Past 10 Years

Ever since the news of Tigress T-4 dying surfaced, conservationists all across the country have expressed their concerns over the irresponsible treatment of the tigress. Sarita Subramanium who was vocal about authorities killing alleged man-eating tigress Avni also expressed her anger over the inefficiency of the authorities. She went onto say that authorities in Maharashtra are treating big cats as guinea pigs, without any proper procedure and training given to officials.

Sunil Limaye however, claims that the senior officials were present at the spot when the vet darted the tigress. Although there has been no response regarding an enquiry into the case, we remain hopeful that this was one of its kind accident which won’t be repeated.