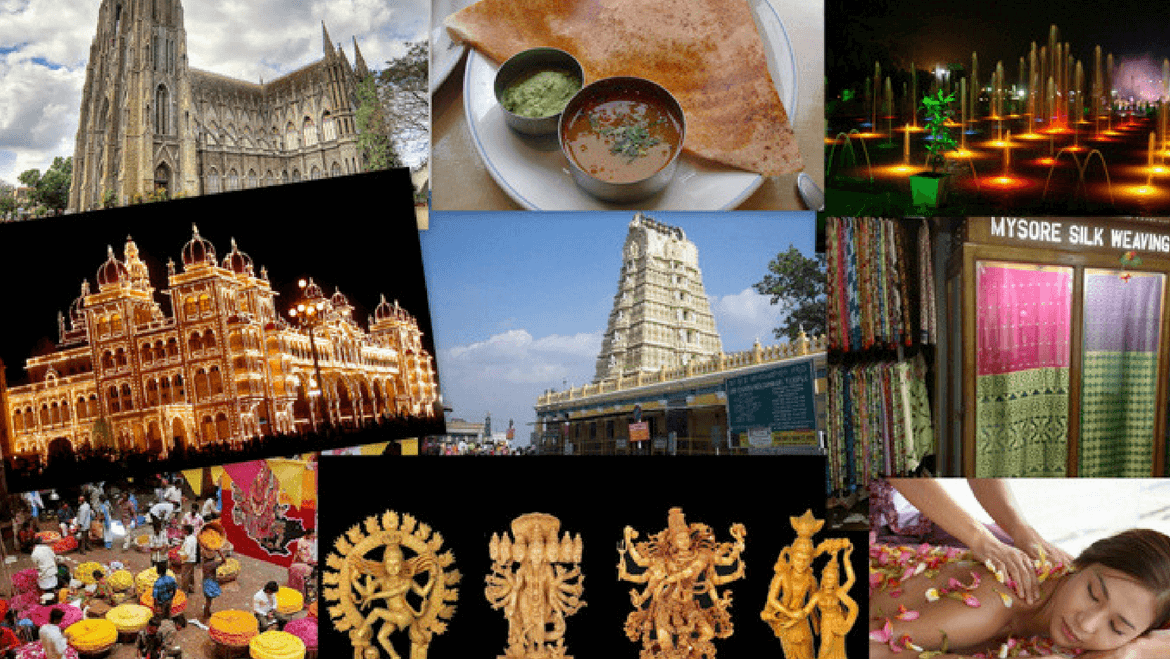 I’m gonna need a minute or two to get used to these lights… The Dusshera or Dasara celebration (As it called in Mysore) at the Mysore Palace just struck my heart and for few minutes my eyes too! There I stood in front of the golden glittering majestic palace with thousands to accompany me and I was glad I made a choice to be here…

So you have made up your mind that you will be driving to places in and around Bangalore… Ah! Then it is not at all that difficult for me to express the beauty of Mysore in words:  the City of Palaces, Mysore, which is one of the popular tourist places in India, reflects the authentic face of Karnataka. From the reign of the Wodeyars to the mighty rule of the legendary Tipu Sultan, Mysore has managed to keep its head high and chin up. The royal heritage and treasured culture flaunts a flawless history that surpassed the merciless warfare against the time.  A perfect juxtaposition with a slight dominance of cosmopolitan era, you will find Mysore making great efforts to strike a balance between its rich culture, inheritance, modernity and contemporary trends. WOW! That could be a memorable heritage and cultural holiday in India for you. Apparently, the bustling markets of sandal, silk, flower and premium incense along with reputed Ayurveda and Yoga centres act as important attractions for tourists.  I would like you to begin your journey through Mysore with me by taking a glimpse of a video shot by Enniocol24 in one of the most famous markets in Mysore called the Devraj Flower Market

Bustling as it may be… Mysore likes to compensate for things that make it common with other cities in India, for  instance, if you are seeking some quiet time amidst nature; Karanji Lake is the place for you. Maintained by Mysore Zoo and situated just behind the same, Karanji is accompanied with one of the biggest walk-through aviary in India as two scenic and well-maintained artificial lakes. Home to many migratory birds and large variety of butterflies, Karanji is a must visit in Mysore. Watch this beautiful video made by Thuryina in Karanji Lake while enjoying a boat ride.

Delightful I had exclaimed when I reached Chamundi Hill that stands at an elevation of about 1062m above sea level. Holding mythological importance as a place where Goddess Chamundeshwari killed the demon named Mahishasura after a fierce battle; Chamundi Hills have become a popular place to visit in Mysore. It is also one of the 8 most sacred hills in South India. It is a great point to get a bird’s eye view of some important features of Mysore like race course, the Lalitha a.k.a Mysore Palace, Karanji lakes, the Maharashtra Statue and several other smaller temples. The statue of Nandi the Bull somewhere in the midst of the long stair case leading to the hill is also an added attraction of the place. Let us watch this video shot by Shridhar Rao at Chamundi Hills.

If it hadn’t been for the palaces, many people would have had second thoughts about whether to visit Mysore or not.  Definitely marking the identity, these large structures including Mysore Palace or Amba Vilas Palace, Jaganmohan Palace, Jayalaskhmi Palace and the Lalitha Mahal (which has apparently been converted into a 5 star hotel) are worth visiting. With most of the structures in Indo-Islamic or hybrid style architecture, you are going to find yourself surrounded by incredible creativity and bizarre imaginative powers. Even though the Mysore Palace that we see now had been designed by an English architect, this palace has its importance dating back to the times of Wodeyar Dynasty. You will simply love the architecture that is embellished with carved wooden doors, mosaic floor and an array of painting depicting scenes of the Edwardian reign. The best time to visit this Mysore Palace would be during the Dusshera festival when the entire mansion glitters with thousands of lights. Here is the video of the illuminated Mysore Palace on the special occasion of Dusshera shot by John Jacob.

Mysore Palace on the occasion of Dasara (Dusshera)

The modern day Mysore has saved to itself the ancient Indian trait of health and fitness. There are a large number of yoga and ayurvedic spa centres in Mysore that have become quite popular. The bustling city has taken the help of therapies to relax the frail minds and deteriorated health conditions… what a great way to tackle modern day issues with age old medical practices. Abhyanga massage and Ashtanga yoga are the most common practices that you will sight in the city. Emerge Spa, Indus Valley Ayurvedic Centre, Ashtanga Yoga Reasearch institute, Swaasthya Ayurveda Centre and Sri Patanjala Yogshala are some of the best places where you can try a relaxing ayurvedic spa and learn some essentials of age old practiced yoga. What we have here is a video of the yoga centres in Mysore shot by Divya Yoga School, where you can see the Ashtanga yoga:

Well, after a rejuvenating yoga and ayurvedic session, you may like to see the spiritual colour of Mysore. Other than the famed Sri Chamundeshwari Temple, perched on the Chamundi Hills, you can visit the towering St. Philomena’s Church. This neo-Gothic style Church was constructed between 1933 and 1941 and its architecture is marked by stained glass windows. The relic from the 3rd century AD has been kept safe in what is one of Asia’s largest Gothic-style Cathedrals. You will love the peaceful ambiance inside this divine structure; let me give you a glimpse of what this towering cathedral is made of. This is a video by Chaitanya Krishna S of St.Philomena’s Church.

I always thought, since Mysore is an important city of Karanataka, one may only be getting the authentic taste of Dosa and Idli with some delicious sambhar, but what do we know, I was proven wrong. Well, of course Dosa and Idli do maintain its position but a lot of street food caught my eye in Mysore, from the tempting Kathi Kababs to Masala Puri and spicy Dry Gobhi. Apart from the authentic meal like puri palya, uthapam, vada sambar, kosambri and palayas, you will really enjoy gorging on the lip smacking street food in Mysore. Hence, when you are on a trip to Mysore make sure that it is also a culinary trip. Burp!!! Here is a video shot by Wild Films India that gives you a hint of how delicious the street food is in Mysore…check it out.

Video on street foods in Mysore

From palaces to churches, temples to ayurveda and food to hospitality, Mysore leaves no stone unrolled. The impeccable hospitality and the vibrant colour of culture is something you are going to cherish for a very long time after a trip to Mysore. Here is something that has made an indelible mark over my beautiful memories of Mysore, check out this video shot by Anirban Banerjee of the Light and Music Show held every evening at the majestic Mysore Palace.

Video on Light and Music Show at Mysore Palace

Wish you a happy journey!