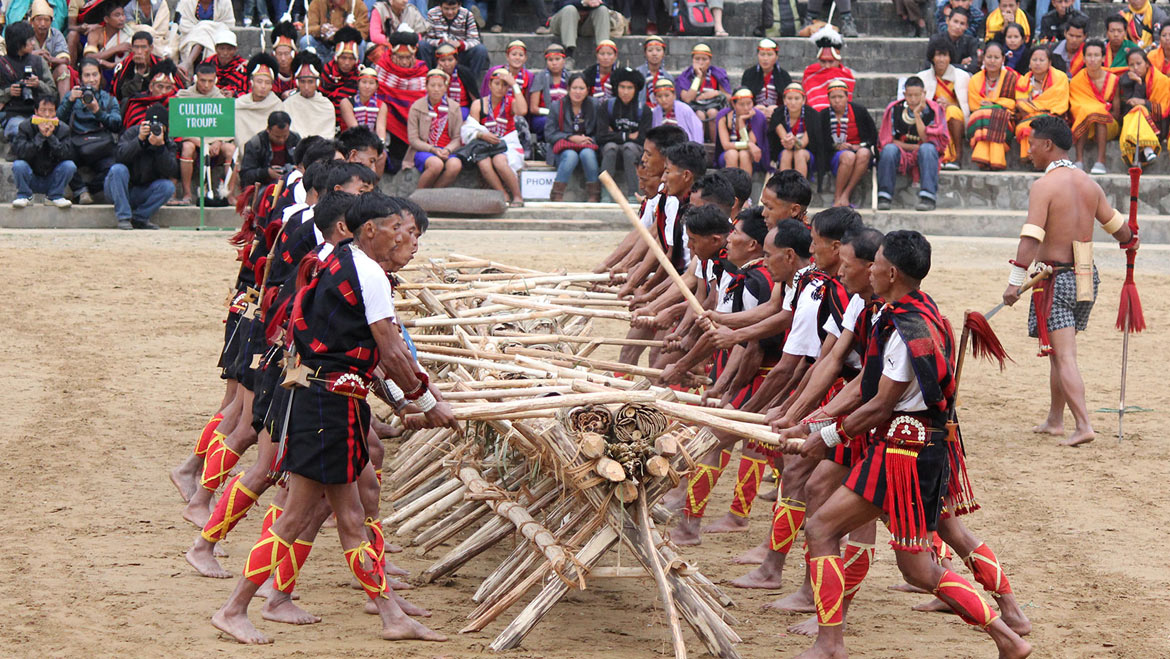 Trendy and laidback is how I would like to introduce Kohima to you. This capital city of Nagaland is far from the margins of the hurly burly city life…Not quaint in any sense, just peaceful and beautiful in all senses. When you delve deep into the city, you shall find a potpourri of culture dominating the lifestyle in Kohima. On the other hand, you may like to question their eating habits, but HEY! Let these pretty people enjoy their piece of life while you enjoy the piece of wonder that Kohima has been able to safeguard for so long. As the city has a mostly Christian population you would see a more liberated life here with lot of music and singing.

Let us catch a glimpse of the ambiance in a church shot by Wild Films India, where the famous Tetseo Sisters performed a Christian hymn:

(Hymn by Tetseo Sisters in a local Church in Kohima)

The above video is a fair glimpse of your North-East India tour to Kohima of how melodious the life can be. The zeal for a free life can be traced from 1840, when the freedom loving Nagas defended their territory from being colonized. It actually took four decades for the British to finally bring Nagaland under their rule. Later the British converted Kohima into a check post for the eastern region; Kohima also witnessed the brutal battle of World War II, which took place between the Allies and Japan. There exists the War Cemetery that is dedicated to thousand of Allied soldiers, who lost their lives in the Japanese invasion during World War II. At this cemetery you shall also see a grave called Tomb (Grave) of an Unknown Soldier, Here is the video of the War Cemetery shot by Wild Films India, let us take a look.

How tranquil does this beautiful city feels…these green rolling mountains, these serpentine streets, these innocent looking people… Nagaland is home to 16 tribes with each tribe following a different set of rituals and lifestyle. One such tribe is the Kachari Tribe that ruled in 13th century. Known for its rich culture and resemblance to Hinduism, you can see the relics of the same in Kacharigaon Heritage Village in Dimapur. A beautiful place to drive to with some really courteous people to welcome you, at Kacharigaon you shall witness the hospitality of Nagaland.

If you trace its history, you will realize that Nagaland owes too much to its culture in every aspect. From houses to hamlets, from hamlets to villages and from villages to cities, culture is a common thread that has sewed Nagaland together. One of the places that you must visit in Kohima is the Kohima Village or the Bara Basti. Considered to be the second largest village in Asia, the village is divided into 4 different Khels that consists of several clans. The imposing gateway of the village is the prime attraction here. Kisama (12kms) is yet another fascinating village near Kohima that you might like to visit. Famed for hosting the Hornbill Festival, which is one of the most celebrated festivals in Nagaland, this village gives you the authentic reflection of rural Nagaland. Here in this Kohima Best Travel video shot by Wild Films India, let me assist you on a journey of this exquisite village.

You will like to dance your way to Kisama village… the first reason being the exquisitely created village…the second reason being the cheerful ambiance of the same. If you are in Kohima any day close to the Hornbill Festival then this will be your best trip to Nagaland. Celebrating the culture and lives of people, this festival is one of the prime attractions in Kohima. Let us together watch this colourful video shot by Wild Films India depicting the opening ceremony of the Hornbill Festival in Kisama Village.

Lost in the murmur of streams and the serenity of flower-strewn meadows, Dzukou Valley is the place that you have to see around Kohima. Situated 168kms away from Kohima on the Manipur and Nagaland border behind the hulking high Japfu Peak, Dzukou Valley is a treat for nature lovers. Also known as the Valley of Flowers of the North East, Dzukou is a great place for witnessing a rare type of lilies and also for trekking. The best time to trek to Dzukou Valley would be between June and September and the trek is flagged from Viswema Village. Here is a video of the Dzukou Valley shot by Sushobhan Roy that shows the lush green beauty of the same.

(The panoramic view of Dzukou Valley)

Coming to the indigenous tribes of India in Nagaland you may feel exhilarated by the opportunity to witness something that marks the identity of the state. Their varied traditions, lifestyle, bizarre outfits and impeccable handicraft skills are what will attract you in and around Kohima.  While Angami is the most commonly known tribe in Kohima, you can also see around 16 different Tribes in entire Nagaland amongst which Lotha, Sema and Sangtam tribes are commonly found around Kohima. The Lothas are mainly from the Wokha District and majority of them are Baptist Christians, who annually celebrate a harvest festival called Tokhu Emong. The Sema tribe or the Sumi Nagas are one of the most commonly known scheduled tribes in India. Known for their aggressive nature in warfare, this tribe once relied on headhunting. Ahuna and Tuluni are their major festivals. Unlike other Naga Tribes, Sangtam chose to follow different religion other than Christianity. Mongmong is the major festival of this tribe. Here in this Kohima Best Travel video shot by Wild Films India take a look at the performance of Sangtam Tribe in the famed Hornbill Festival.

Since we are in Nagaland AND if we do not speak about food and drinks, things would be at odds! I would love to poke my nose and follow my gastronomist instincts through the traditional kitchens of Kohima. Good News for Non-Vegetarians! You will be spoilt for choices here; you shall like Pork with Bamboo Shoots, Bamboo Steamed Fish, Beef Pickle and Crab Chilli Sauce. Nagas like their food to be spicy and scented with Bamboo, so you may consider a bottle of water handy on the dining table if you are eating in Kohima or in areas around it. The recent influence of Tibetan and Chinese food has also taken over, and there are number of restaurants in Kohima that serves dishes like Momos, Thupka and Chowmein. The local beverage made from rice is Zouthou, which is a popular drink in and around Kohima as well. Here is glimpse from the famous NDTV travel show ‘Highway on My Plate’ to give you a fair idea of what your treat in would be like in Kohima.

Food did GOOD to me… so let us now move to some skills that Nagas are proud of. Since Kohima is the capital of Nagaland, you can see a perfect juxtaposition of culture here and thus can find an intriguing collection of handloom and handicrafts here. Basketry, pottery, cultivation, wood carving, spinning and weaving, carving and dyeing metal work are worth taking a look at. The State Museum in Kohima is one place that you can see the samples of distinctive Naga skills along with many fascinating artifacts like ornaments, war weapons and tribal emblems (spears, shields and headgear). The Sales Emporium situated at the heart of Kohima is a place that sells notch handicraft and handloom articles, you can shop for souvenirs here if nothing else. Check out this Kohima travel video shot by Wild Films India.

WOW!! These talented Nagas can virtually give life to whatever they touch! Each item is made flawlessly with their expert hands…Well, as much as this beautiful state cherishes its culture and nature’s beauty, it takes special care of the wildlife and their natural habitat as well. The Intaki Wildlife Sanctuary near Kohima is certainly a place worth visiting. Hoolock gibbon, golden langur, hornbill, palm civets, black stork, tiger, white-breasted kingfisher, monitor lizard, python and sloth bear are some of the rare animals that can be spotted here.

Let us now walk through a unique market place called the Naga Bazaar in Kohima…UNIQUE, because it is more of a tête-à-tête centre, where you can interact with the locals and gain immense knowledge on Naga culture. You can also find few interesting items unlike any Indian and market and thus it is one place that you must visit in Kohima. The Food Bazar and the specially organized market called the Christmas Bazaar during the Christmas Season in Kohima are some other places that you must not miss out on.  I must tell that you will also be impressed with how conscious the people are about fashion in Kohima! Here is the video for you of the crowded Christmas Bazaar in Kohima shot by Wild Films India; it will certainly make you visit it someday!

If you are traversing the Aradura Hill in Kohima, you shall be bound to stop by this massive structure called Kohima Cathedral. Believed to be the biggest church in North East India, this colossal shrine is known for its exceptional architecture. The 16ft Crucifix is the main attraction of this church in Kohima.  The 14 Stations, which are replicas of the scene of Jesus‘final journey with the Cross to Calvary; start from the slope of the Aradura hill and further leads to Cathedral. This Kohima travel video shot by Wild Films India offers a good glance at this beautiful Kohima Cathedral. Take a look

WELCOME to the GREEN Village! Welcome to Khonoma Village… They don’t hunt, they don’t cut trees here AND that’s what makes this place worth visiting in Kohima (20kms from Khonoma Village). The village is inhabited by Angami Tribe, who actually has set examples by initiating and maintaining a Green Village. Without further ado let us watch this video by Shradha Jain that takes us on a journey through Green Khonoma Village in Kohima.

(A documentary on the lifestyle of Angami Tribe, Khonoma Village)

If there is a place to be at this time that I could wish to go to… Apparently it will be KOHIMA. More than a hill station in India Kohima is an experience…Experience that is nothing short of that of an INCREDIBLE India. The best time to visit Kohima would be between October and June; a homestay would be an ideal accommodation in Kohima but if that is not an option there are many hotels in Kohima that you can tuck yourself at. Kohima knows exactly how to welcome its guest, so just plan your visit and fall in love with this place!