Kerala Trip- A Journey with the Self 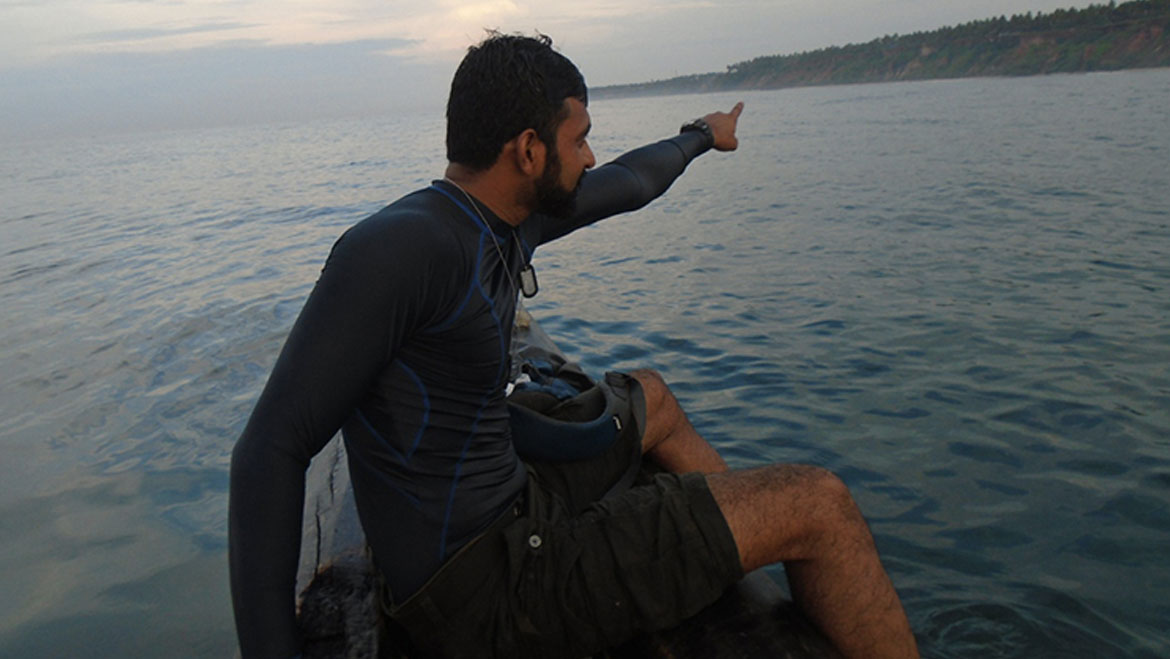 I went on a solo trip to Kerala from 30th Nov to 5th Dec 2015. I started my journey on 30th Nov from Delhi. I took an afternoon flight from Delhi to Trivandrum, reached there in evening. I had planned to move to Kovalam . I came out of airport & booked an “Uber Cab”. I got a call from driver & he told me that Uber only operates in the Trivandrum city. Then I took a prepaid taxi from airport to Kovalam, they charged 500 Rs. I didn’t have any hotel bookings in advance. I asked the driver about the cheapest hotel near Kovalam, he told that the minimum would be around Rs1200/. I was not convinced, I browsed internet & looked for the best prize stay for the night. I found a deal of 800 Rs. I did the booking while travelling. I guided my cab towards hotel. I reached hotel by around 8:00PM. I changed & walked towards the beach area. It felt awesome. Beach had a concrete embankment at some distance away from sea, it had a pathway for walking & all shops were lined together. It looked very organised & clean. 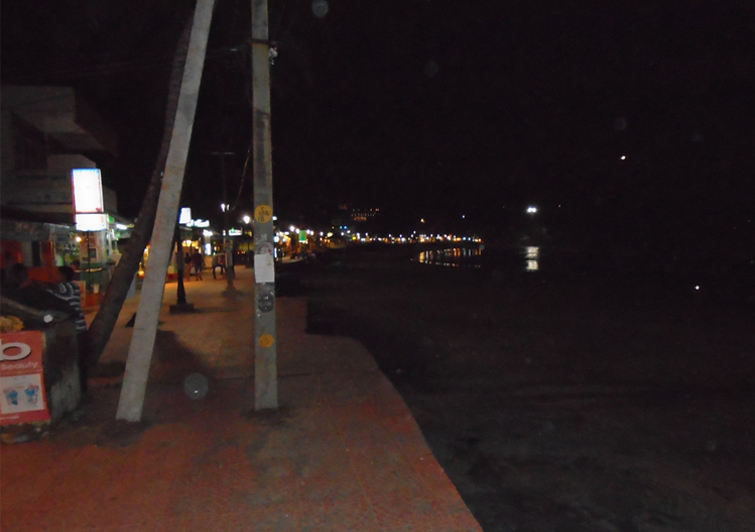 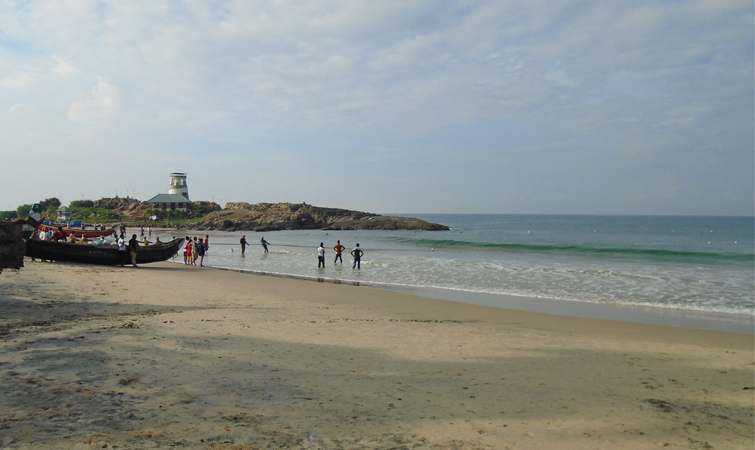 Kovalam beach is also called “Hawa beach, it is connected to light house beach. If one looks at it, it seemed a single beach but different names have been given. Lighthouse beach is named because of its proximity to lighthouse. There are all kinds of shops along the beach. I took a walk of around 1 km till lighthouse beach & then I decided to eat something & enjoy the sea view. I had read a lot of positive reviews about Malabar café located along the beach. I went there, had a beer & some non veg snacks. They have seating facing the sea with reasonable rates & good food. I noticed mostly foreign tourists there. At around 1030 in the night, I called it a day & moved towards my room.

I went early morning to the beach. View was majestic. I saw the fishermen pulling their net on the sea shore. This is a must see event. Fishermen sing in chorus with every pull. Three –four of them go into the sea & make sound in water to drive fishes towards the net. 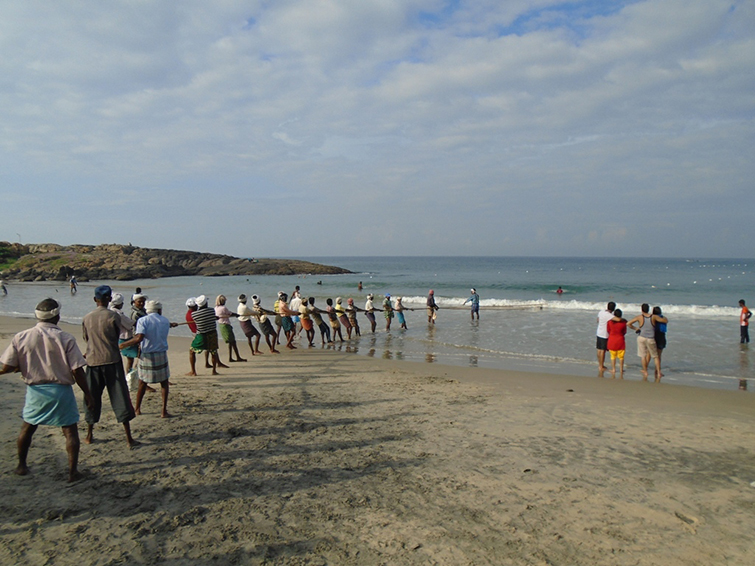 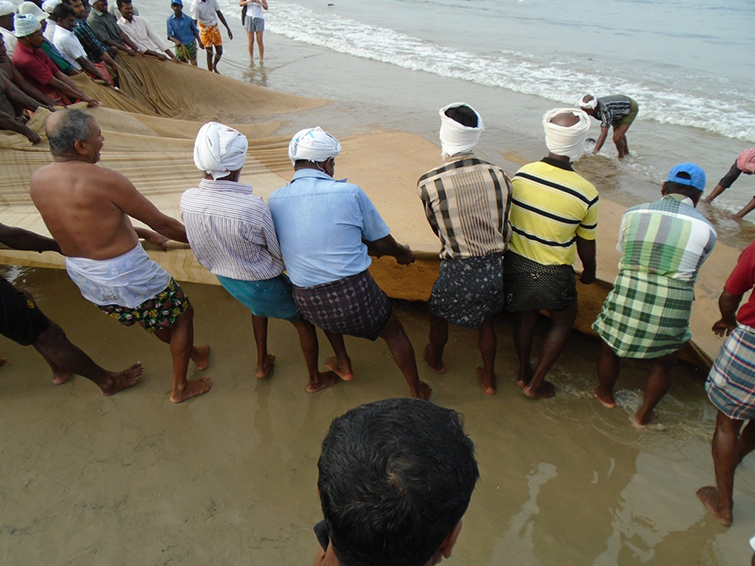 After this again I took a walk along the beach and clicked some pics. 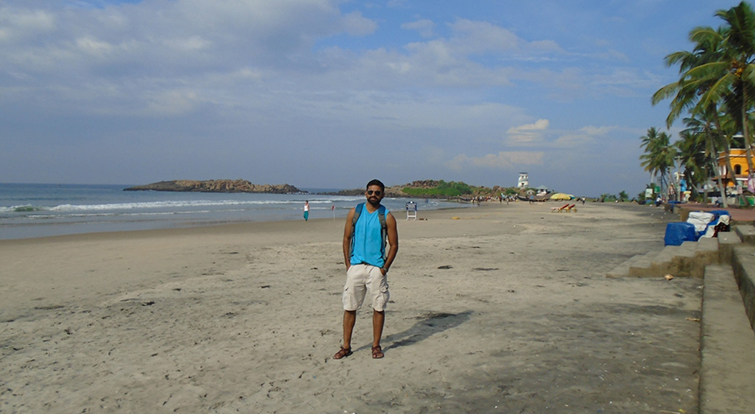 There I met Marvin, a Belgian person. I chitchatted with him for some time. He was working with surfing school there. He told me about “Kerala café” which serves good local food. He also took me to the surf school & shop. I wanted to take a lesson, but since it was low tide with very few waves, so no lesson was being given that day. So, I went to Kerala café, ordered Kerala parathas with curry. It was awesome. Don’t be surprised if u get drinking water here which is reddish in colour & warm because they mix a herb with water which they claim is good for health.

After my breakfast I went to see “Vizhinjam Light House “located near light house beach. 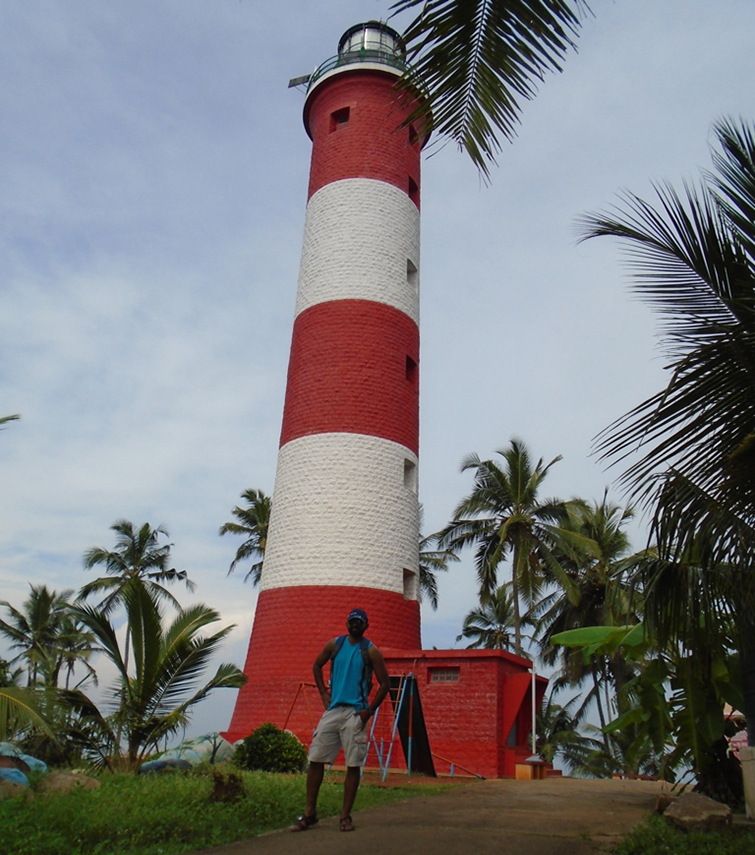 It opens at 10:00AM. View from lighthouse is majestic. One can see Kovalam beach, vast sea & Kovalam town. I even went to see the restricted portion which contains the reflectors/prisms & lamp. 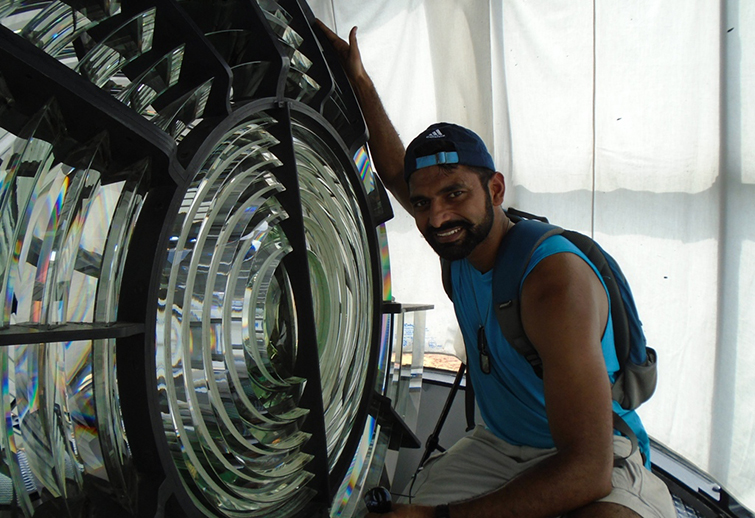 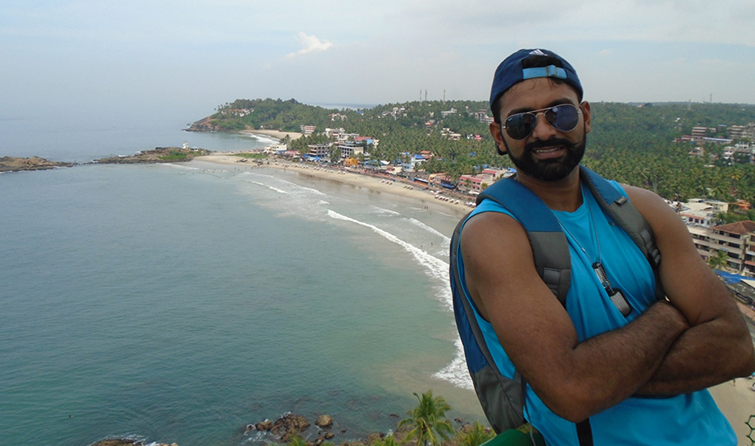 I met a tourist from Kolkata here, who helped me in clicking my pictures. He told me about his travel experiences of Kerala as it was his last day of trip. After spending some time at lighthouse, I came down & came to know that there was an aquarium nearby. Although it was around a km from there, I decided to walk. I visited the aquarium. It has a wide variety of fishes & sea creatures. One is allowed to carry a camera inside after paying nominal charges. It is worth a visit as it facilitates closer view to the varied sea life. 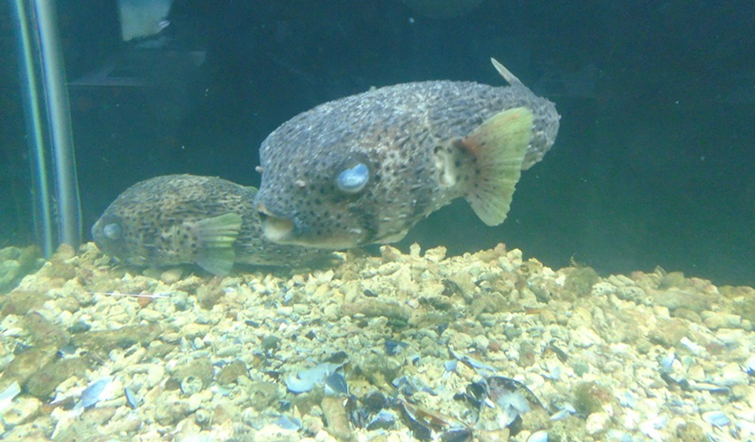 After this I again walked down to beach booked a chair on the sea side, kept my stuff there & went for a swim in the sea. I loved swimming with the waves, after exhausting myself I came out &decided to take some rest. While I was taking nice sunbath, weather turned hostile, I packed my stuff & moved for a local meal to Kerala Café. By the time I finished my meal, it started drizzling. I moved to my room & had a nap. In the evening I went around a walk enjoying the beauty of the sea & glitter of local shops. I also visited Panchkarma centre for a rejuvenating massage. Night I had seafood & beer at Malabar Café . This marked the end of my day.

Next day I decided to go to Varkala beach. After my morning walk along the beach & local breakfast, I hired a scooty from a shop & started my journey. Kovalam to Varkala is around 60 kms . I did not face much problems in navigation as it is a national highway (NH47) which connects these places. 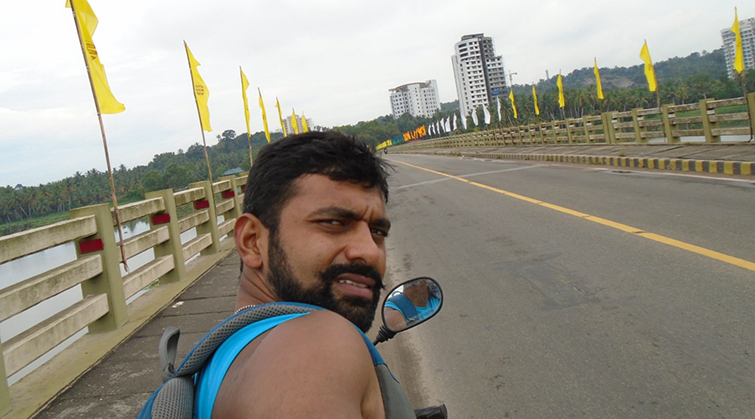 I had planned to stay in Varkala for one night. I reached in the afternoon. I immediately changed in to my beach dress & moved towards beach area. Varkala is a different beach it has a cliff along the beach & all shops & cafes are on the cliff. Before going to beach I went to temple café, it had awesome ambience with nice view, jubilant staff & great music last but not the least good coffee. After my coffee I went down the stairs to beach, it’s a huge beach with stupendous view. 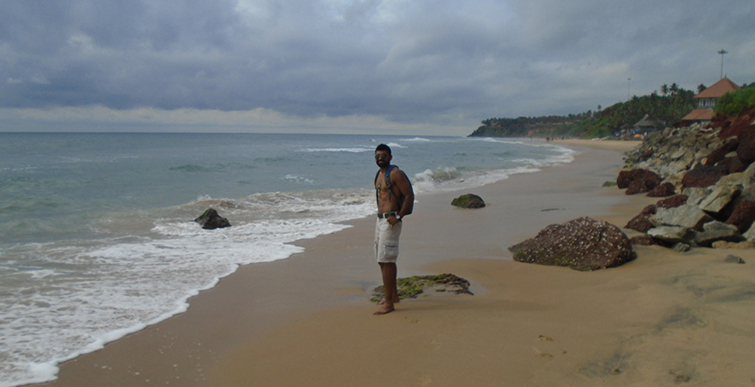 Crowd here was mostly European. I had a long walk along the beach, some photography & then I joined a game of Frisbee being played by locals. Although I was no good in throwing but I caught it pretty well.

After a half an hour Frisbee I moved to the other side & saw beach volleyball being played by local boys. Being a volleyball enthusiast myself I requested to join & they happily accommodated me in the team. First time I got an opportunity to play volleyball along such a beautiful setting. I enjoyed a lot. We played till last light. They seemed happy with my performance & requested me to come again next day. 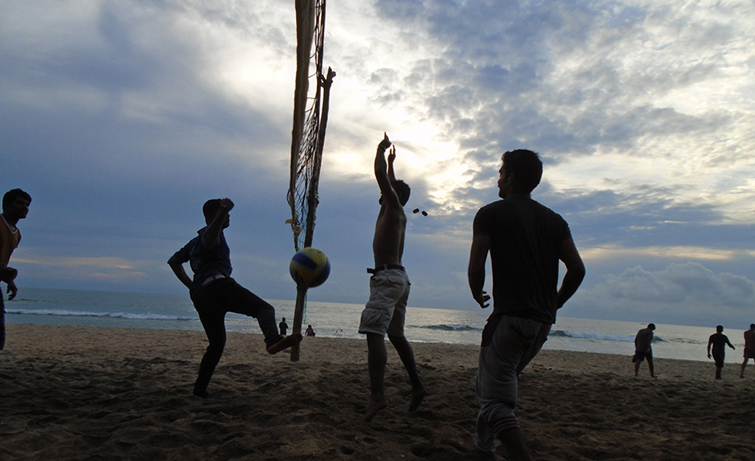 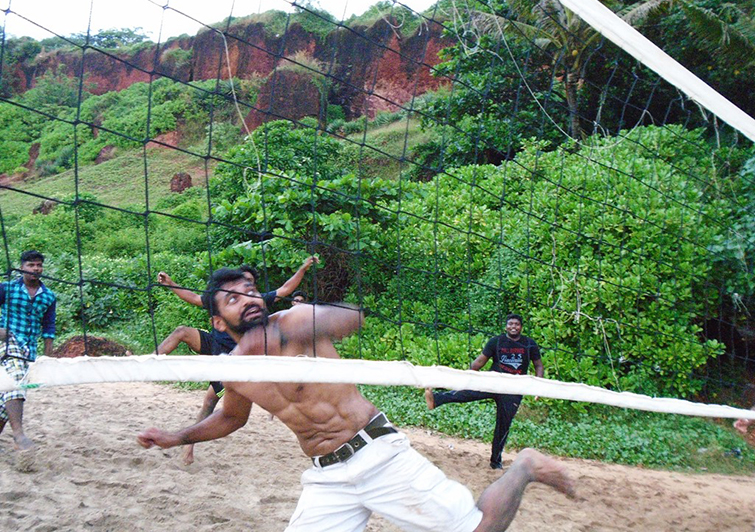 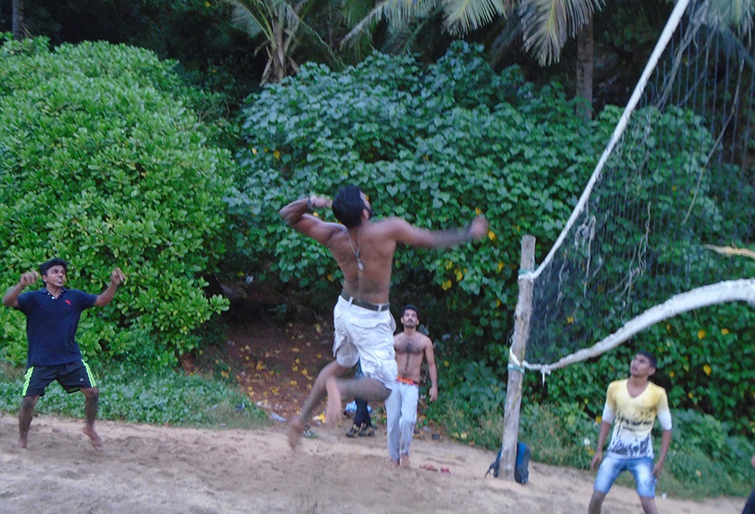 After this I was almost dehydrated, I badly needed shower & drinking water. But after dark one can’t go to sea for taking a bath. But there are various places in the cliff that gives out fresh water. People also drink that water. I took a shower & quenched my thirst at one such stream. While going back, I met one of the lifeguards (his name was Husil), he asked me if I was interested in kayaking & going deep into sea & watch fishing early in the morning. I readily agreed. He confirmed if I knew swimming, after reassuring him that I could swim quite well, he asked me to meet him at 0600 hrs next morning. Thereafter I moved up & decided to take a round of seaside shop. I did some shopping there & then went to a Restaurant. I was extremely hungry; I had lots of seafood & beer. While moving back to my room, I had a nice cup of coffee at temple café. I put an alarm of 0500 hrs next day & went into slumber.

Day started quite early as I reached at 6:00AM at decided meeting place with Husil. He took me to his village Chilakkoor on his bike. He offered me tea then we moved to sea shore. I was carrying small bag with my camera, mobile etc. We packed everything in various layers of polythene. We took snorkelling tubes. Then I saw that there wasn’t any fibre kayak, we had to make it in traditional style by joining wooden pieces. We carried improvised oars with modified bamboos. 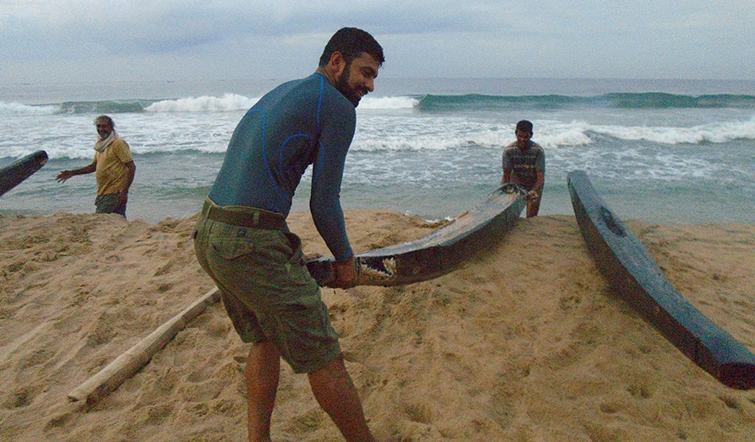 Wooden kayak was not very comfortable to sit, but discomfort was negligible relative to the adventure on offer. I sat in front & we started paddling. Initially we negotiated a lot of waves, it was a great feeling. When we entered deep in the sea, it became very calm. We could see the fishing boats in action. We carefully took out the camera & clicked pictures. 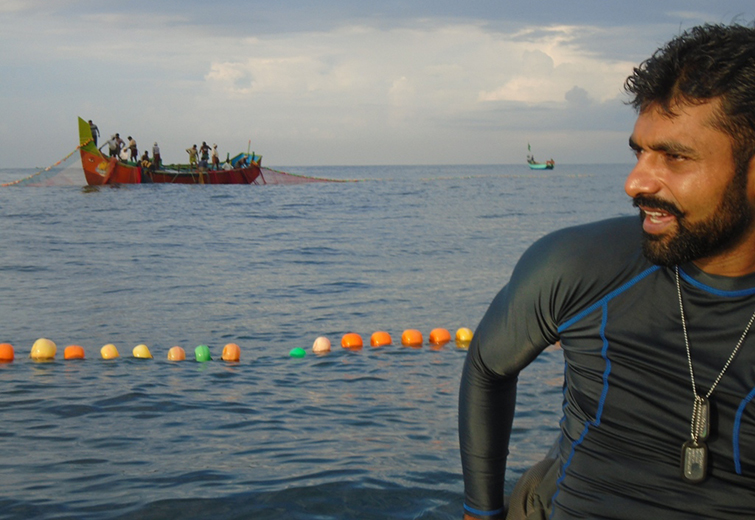 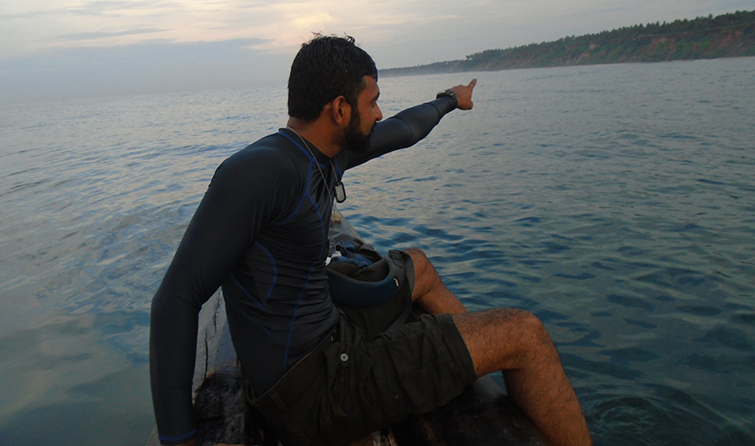 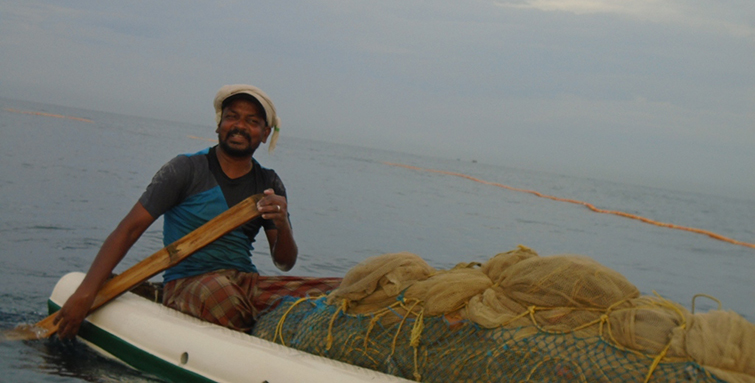 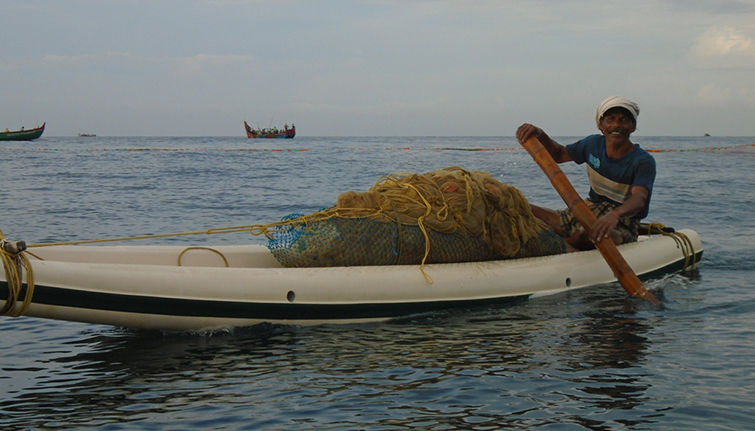 How to plan a perfect holiday trip to Kerala

Husil explained me how the fishing is done including the identification of fish group & laying of net with the help of motors. We moved towards a boat which was laying its nets. I saw how they worked, unluckily that boat developed a technical snag & the fish group escaped the net. Then we moved to another boat which was laying net in nearby area. There I could clearly see the fish group getting trapped in the net. After that we tried to spot the dolphins but couldn’t find. Then I decided to do some swimming. I handed over my bag to Husil & jumped in water. Sea shore was faintly visible. I decided to swim till the shore that is the longest distance swimming I had ever done in an open sea. I loved every moment of it.

Vast pacific, early morning, swimming, stupendous surroundings, what more could I have asked for. After reaching to the shore, I did some photography of fishermen. Husil then took me around the village to some picturesque views. It was an out of the world experience. 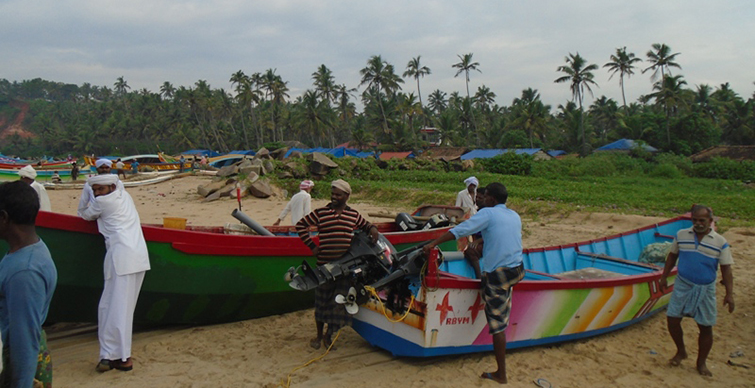 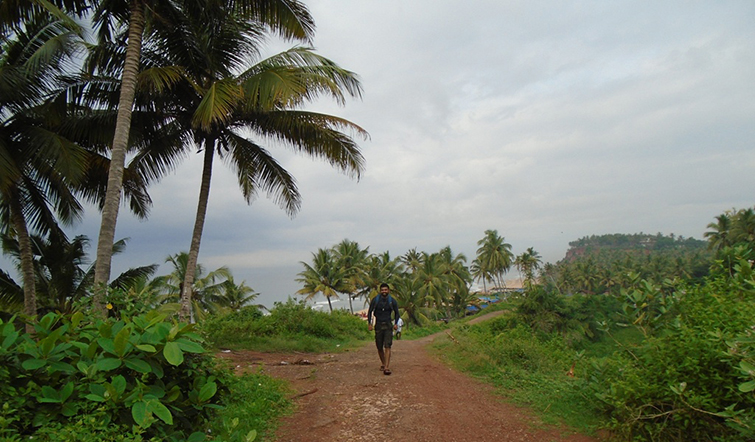 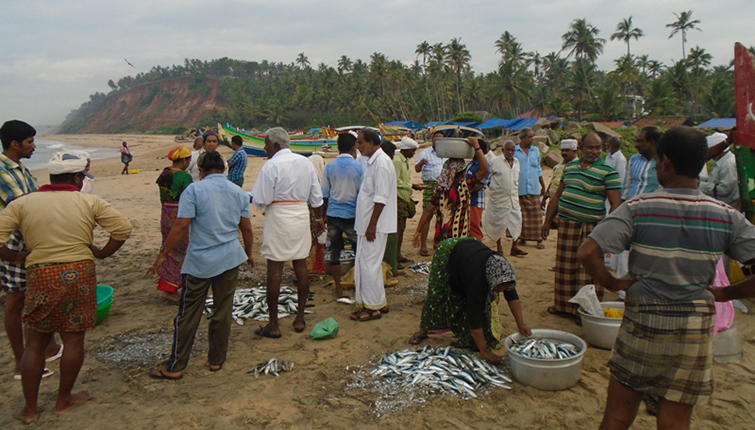 Seeing this beautiful road, I wanted to ride more, so I decided to go to Kollam beach which was around 25 kms from Kappil Lake. I enjoyed “Malai Nariyal pani “enroute to Kollam. I reached Kollam in the afternoon. I was not much impressed by Kollam Beach. I spent very less time there & moved back to Varkala. I again went back to beach. Varkala beach is also known as “Paapnashnam beach”, it is believed that taking bath here washes sins of a person. I again played Frisbee, took bath in the sea & went again for the game of volleyball. I was warmly welcomed by the team. We played volleyball till last light again. Later I took shower & had heavy dinner & went off to dream world. 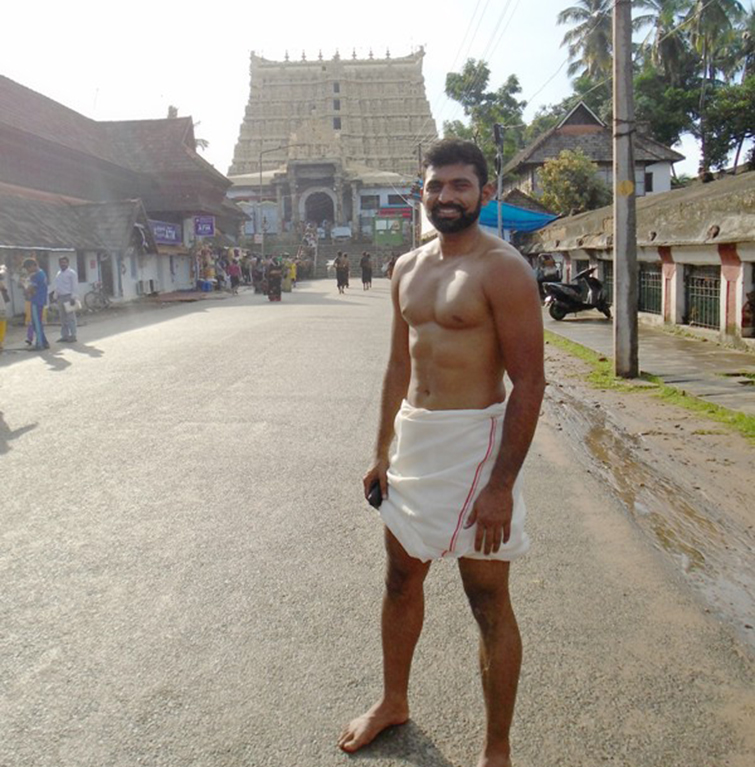 It was last day of my trip. I had breakfast & moved to Kovalam to return the scooty. I reached Kovalam by around 1130 hrs. I booked a hotel online in Trivandrum. I took local bus from Kovalam to Trivandrum. I checked into hotel, took a quick nap & moved to see Swami Padmanbham Temple. It’s a beautiful temple. It has some strict rules for entry like, males have to wear dhoti, ladies in sarees or dhotis on their dresses & most important one is that it allows entry only to Hindus. However if you are a Hindu, then this temple is worth a visit. Apart from its religious value, it has unique architecture & in terms of assets, it is the richest religious institution in recorded history of the world. After the temple visit, I decided to do some shopping. I went to SMSM Emporium; it offers large variety of handicrafts & local materials. It’s a good place for taking souvenirs. After this I visited Connemara market for shopping of spices. Here there are lot of shops & one can get good variety of spices & other items in reasonable rates. I bought all kinds of spices & herbs which I found useful for me. Although the shopkeeper did not understand Hindi or English, he was very patient with me. He allowed me to make bill for myself as I wanted to write down the names of all spices & herbs clearly. I was tired after the shopping. I moved back to hotel, freshened up & had dinner. I had an early morning flight from Trivandrum to Delhi on 5th Dec. I finally said goodbye to Kerala with lots of good memories & a resolve to visit again.

This blog is the beautiful contribution of our avid follower, Sandeep Kaushik. Being a government employee, he also enjoys traveling and cooking.