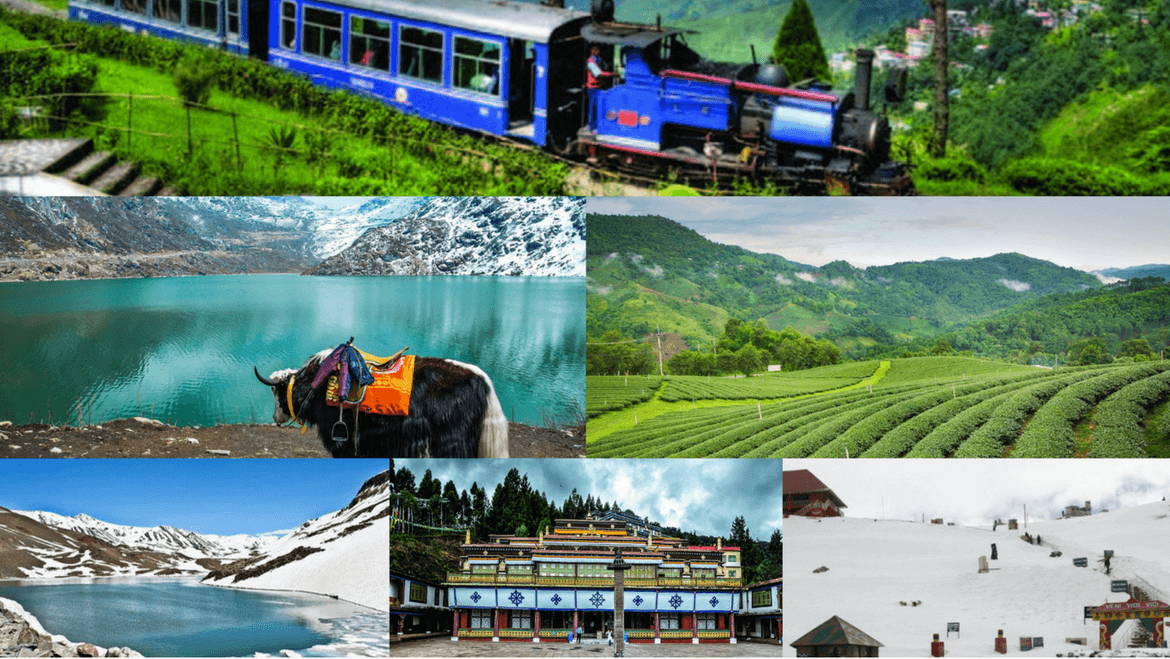 Does freakiness of touring new places run in your veins and do you wanna explore a land with traits different from the stereotypical travelling destinations in India? Well, then I must mention that Gangtok is the place you are looking for! Gangtok is one of the most tourist-swarmed places of Sikkim. Gifted with remarkable natural resources, elegant mountains and some fascinating panoramas, this capital city of Sikkim has all that you seek in a perfect tourist spot. Erghhh!! It’s really hard to wait more as I am getting restless to tell you about all what you can relish here in Gangtok.

Among the scores of reasons for travelling Gangtok, the natural exquisiteness that it posses comes first to my mind. The Himalayan Zoological National Park is the place where you can spot wildlife amid the natural beauty of the place. If you go up the city, to the higher altitudes, you could witness the pine-covered mountain dotted with bamboo plants. You tour to this place will become more pleasant on spotting exotic wild animals like Goral, Black Bear, Red Panda, Barking Deer, Large Indian Civet, Blue Sheep, Himalayan Thar, Pheasants, Serows and Many more. For a zealous hiker, the tranquil road with the hypnotic chirping of birds is the perfect place to unwind! To know more, watch this amazing video shot by Travel India.

The entry of this park is just opposite the Ganesh Tok, from where one can get a bird’s eye view of the all-embracing Gangtok. The sight from here is in spectacular with snow peaks proffering the ideal setting for a panoramic view of the town. Devoted to Lord, Ganesh Tok (Ganesh Temple) is positioned at an elevation of 6500 feet on a picturesque hilltop. Here is an informative Ganesh Tok video by Travel India.

Hanuman Tok, situated around 9 kilometers away from Gangtok, is also counted among the entrancing tourist attractions in Sikkim. You can enjoy some arresting views of Kanchenjunga from this place. This majestic Himalayan view tells you tales of the legends from the Himalayan Region. This is not all! You can also relish the far-off waterworks of Selep, which is the major source of drinking water for entire Gangtok. At a little distance ahead of the flight of stairs leading to the Hanuman Temple is the burial ground of the ancient royal clan of Sikkim. Here is a video on Hanuman Tok shot by Travel India that will tell you in deep about Hanuman Tok.

On my trip to Gangtok, I found this city to be a great place where one can go for evening walks as well. Mall road in Gangtok is one such place. There are lots of shops ready to satiate the urge for shopping in you. In the evening, I used to take myself out of my comfy room in Hotel Sikkim Continental and walked on this road and sometimes used to shop some items indigenous to Gangtok. Talking about my Hotel, Hotel Sikkim Continental was a perfect and relaxing hotel which was an ideal blend of contemporary and traditional way of hospitality. The Gangtok video by Kripa Balaji Tours given below will provide you valuable insights about the hotel where I enjoyed my laid-back stay.

Gangtok is also well known for its local drink called Chaang. It’s one of the most prominent local beverages of India. It is an alcoholic drink made up of fermented millet. Certainly, the food of Gangtok is something that I enjoyed a lot, and so will you. The scrumptious cuisine of Gangtok took all of my hearts and locked my senses in its fascinating aroma. The striking member of this cuisine is the palatable Tibetan Food. This food gave my tongue a taste of Tibet. You can try the delicious thukpa in Gangtok. It is a dish made with noodles. Here is a video shot by Mark Wiens, telling about the famous Tibetan Food in Gangtok.

[ Video on Tibetan Food in Gangtok ]

Spirituality is an integral part of a tour to India, and it is no different when it comes to Gangtok. This fact is perfectly reflected in the monasteries in Sikkim. Do-Drul Chorten is one of the most imperative stupas in Gangtok. This stupa abodes Dorjee Phurba, the relics of Kangyur and other articles holding religious importance. Enchey monastery is a serene place that is home to deities like Yabdean and Kanchenjunga. Another significant monastery is Rumtek Monastery. The monastery incorporates a golden stupa holding the remains of the 16th Karmapa, with a number of other sacrosanct Buddhist relics. This video by Allan Wilson talks in depth about Enchey Monastery.

It is no surprise that currently Gangtok is relishing the success of art and craft. It is best known for lovely products like hand-woven woolen carpets with orthodox Sikkimese motifs. The fine-looking folding Choktse tables prepared of wood must not be neglected by you. Woolen handloom goods come at pretty reasonable rates here. To conserve the skills of the artisans in making art and craft, a directorate of Handicraft and Handloom has been established in Gangtok. Here is a video by travel India, showing the handloom emporium established by the directorate.

[ Video on Directorate of Handicrafts & Handloom-Gangtok ]

The people of Gangtok love to shake their legs to the rhythm of music. Indigenous Nepali rock music, blended with western rock beats and lyrics in Nepali, is well-liked here in Gangtok. For the late night party lovers, there are several pubs where you can shake your legs to the beats of some peppy music at night. Some of the famous nightclubs in Gangtok are Escape Disco, Orthodox, Lounge 31a and Pub 25. Here is the video shot by Arash Babaei, giving you a glimpse of a night bash in Escape Disco.

Let me introduce you to another factor that makes Gangtok a great destination to plan a tour. It is the fairs and festivals of Gangtok. This beautiful land has the Buddhist population in majority. One of the main festivals celebrated here is Chotrul Duchen. This festival commemorates the life of Gautam Buddha people make lamps of Yak butter.

Phang Lhabsol, celebrated on 15th August,is another major festival rejoiced in Gangtok extensively. People pay worship to the mighty Kanchenjunga. This festival is also significant as the blood brothers Bhutiyas and Lepchas signed a treaty on this day. Other major festivals you may get a chance to relish are Saga Dawa and Dasain. The video shot by Tashi Wangyal Denzongpa given below will take you through the celebration of Pang Lhabsol in Gangtok, which took place in the year 2013.

Not only the scenic panorama and spirituality are the traits of Gangtok. It also serves as a base for many treks. If you want to carry out trekking in India and choose Sikkim for it, then you have certainly made a smart choice. You will find the lush and fascinating Rhododendron forest while trekking on these trails. Dzongri La and Green Lake are the two major treks with Gangtok as a base. Waterfalls and lakes also lure the tourists in Gangtok. I must say that the vibes that come from these lakes certainly rejuvenates the wits from deep inside. Changu (Tsongmo) is a significant lake of Gangtok and also one of the major high altitude lakes in India. The falls in Gantok are Ban Jhakri and Bakthang. Here is a beautiful video of the fascinating Tsomgo Lake. It is shot by Soumya Roy.

To add interesting flavors to your trip, you can visit Nathula Pass located around 56 kilometers eastwards from Gangtok. It was once a silk route linking Lhasa to the plains of Bengal. You can visit the Indian Border in Nathula as well. The scenic beauty of this place is something that spellbinds every tourist paying a visit here. Here is the video, shot by Gaurav Verma, showing the mesmerizing splendor of Nathula Pass along with the soldiers doing their duty here.

If you love animal safaris, then you are going to enjoy the yak safari in Gangtok a lot. It is a unique experience that can be compared to none. Yak safaris here go to Changu (Tsomgo) Lake. Here is a video by Ashwin Thapa. It will tell you about the Yak Safari in Sikkim.

I know, after seeing the Gangtok best travel videos, you must be feeling an excitement to embark on a tour to Gangtok. In my opinion, Gangtok will certainly provide you the travel moments that you will cherish all through you life!