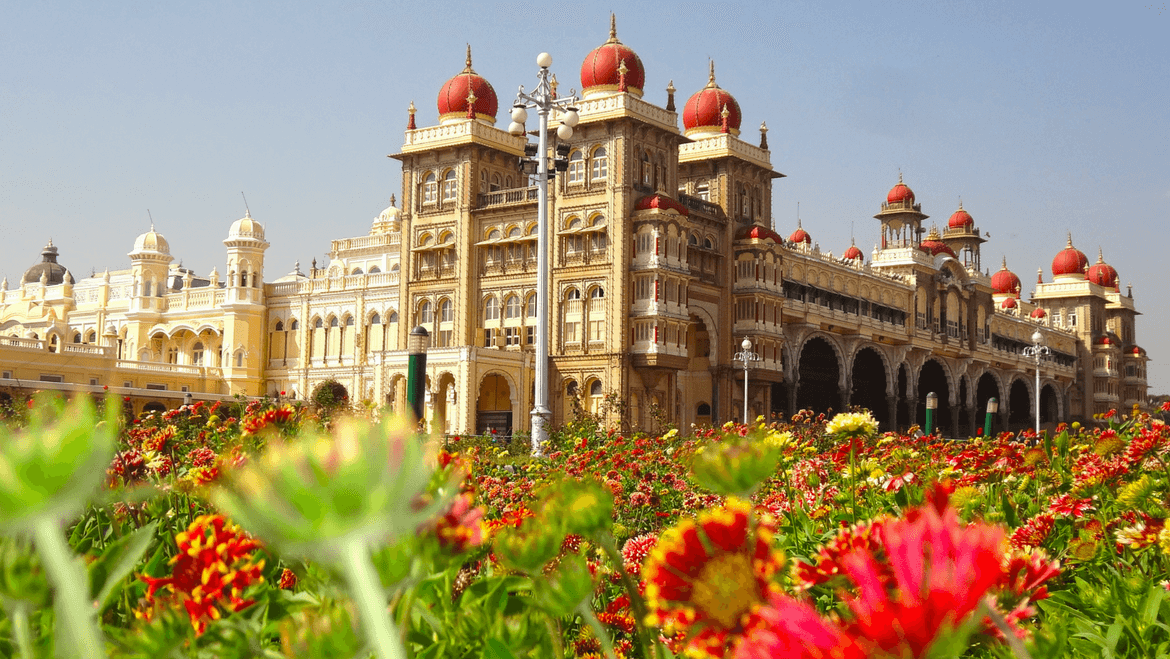 I have been to many places in India where I found different aspects associated with them that enticed me. Some with their wilderness, some with their architectural magnificence and so on… When I was planning to visit Bangalore, I wondered what would enthral me there. All that I could imagine before embarking on the trip was sky-tall buildings, fast-paced life and broad roads. BANG! When my eyes witnessed this city, I saw much more than these obvious elements. From areas teeming with wildlife to spellbinding gardens and much more, Bangalore has everything that can make tourists utter “AWESOME!”

Bangalore, now Bengaluru, is the city of decent climate, and bubbles with energy and life represent a potpourri of culture. This capital city of Karnataka has earned a number of names such as The City of Gardens, Silicon Valley of India, Air Conditioned City and Pub Capital of India. Undoubtedly, this city is an amazing jumble of past and present.

Let me start with something really amazing that you can find in the places to see in and around Bangalore. It is the entrancing rock formation known as Peninsular Gneiss. This rock is formed under high temperature and pressure and is a blend of various mineral constituents. Peninsular Gneiss is undoubtedly a must-visit for tourists without any age bar. One such place with Peninsular Gneiss is Savandurga where you can go for trekking. Here is the Best Bangalore Video on Savandurga Trekking from the lenses of dineshdks1986.

Bangalore is also not just about women in their formals. It has a strong connection with ancient Indian culture, a fact reflected in the dresses of the locales. This city is famous for its Sarees. Bangalore offers an immense assortment of sarees in Crepe, Chiffon and Kanjivaram styles basically. These sarees are well-liked in all parts of India. Below is the video of Rukmini Hall, which is an eminent saree shop in Bangalore. This video is taken by Dipal Desai.

The people of this land are full of life and the festivals of Bangalore wonderfully exemplify it. I was amazed after seeing the way these people observe their festivals. I felt an enormous bunch of rejoicing vibes being out of my wits when I had the good fortune of attending the Bangalore Karaga Festival. This festival is a fiesta of mesmerizing processions and rituals. This festival is organized in March/ April to worship Goddess Shakti. There is a startling procession led by a priest in female attire who is accompanied by an astounding play of swords by numerous bare-chested dhoti-clad Thigalars (a social community of gardeners).  Let’s watch the video on Bangalore Karaga shot by Karthik Bhat

Describing Bangalore will definitely be incomplete without telling about its significance in information technology. Bangalore, the IT hub of India, is renowned worldwide as the Silicon Valley of India. This is the most magnetic factor for the tourists coming to enjoy the holidays in Bangalore. This land is also known as Software Mecca as there is a huge availability of skilled computer manpower, and a spectacular infrastructure for information technology thus attracting companies from abroad to invest here. At every stone’s throw distance, you will find an IT park here. Here is a video shot by Johnny johnson on an IT park in Bangalore.

[Video on Bangalore IT Park]

The hearts of Bangalorities pump the blood that loves to enjoy and party hard. You can see people dancing to the beats of music late at night in the pubs and bars of Bangalore. Nightlife of Bangalore is happening in these places. Some of the bars and pubs where you can witness the enthralling nightlife are The Biere Club, Monkey Bar, Tavern at the Inn, Club Cucoon and Athena Night Club. Here is the leg-shaking video Bara Bara Bere Bere highlighting Bangalore’s Nightlife. This video is shot by Viren Khanna’s Production.

In the lap of this developed city, you will be astounded to see an immense slum area called Rajendra Nagar. There are almost 13,000 families living in this slum. These slums are of around 60 square feet in area. It is in stark contrast to the image people have of developed Bangalore in their minds. Here is a video of the sweet children of these slums singing a Christian Kannada song, captured through the camera of Pastor Chandru.

You will get excited after knowing that Bangalore is also famous for its fervor and literature. If you an art lover, you can visit the international art festival organized here in Bangalore. You can also visit the National gallery of Modern Art in Bangalore. This art gallery displays beautiful paintings by renowned painters like Rabindra Nath Tagore, Amrita Shergill, Raja Ravi Verma and Jamini Roy. Let’s see the video shot by Aseef Iqbal showing the interior view of National Gallery of Modern art in Bangalore.

WHAT’S MORE! It is the center of Kannada Film Industry, which is a major film industry of India. Moreover, as I have already mentioned that the people of Bangalore love to enjoy music, you can visit several music concerts organized here. Let’s invigorate the eyes and ears with this enthralling video of 2011 Bangalore Metallica Concert captured by Adarsh Rao.

Along with a rich present and promising future, Bangalore boasts a prosperous past as well. This land has witnessed the reigns of Marathas, Sultans and British Rulers. One of the monuments representing its rich history is the Tipu Sultan Fort. This fort reflects the struggle of the ruler of Mysore Tipu Sultan against the rule of the British. It embraces the Palace of Tipu Sultan with intricate balconies, arches and pillars. There is a spellbinding garden here as well. To take you to this entrancing fort virtually, let me show you a video by Partha Saradhi Reddy Pulikunta.

One such example of magnificent work of structural designing can be visited in the Bull Temple of Bangalore. This temple is dedicated to Nandi Bull (Vahana of Lord Shiva) and is amongst the oldest in Bangalore. Halasuru Someshwara Temple is the oldest Temple of Bangalore. It is from the era of the Cholas. It also embraces an attractive architecture and mesmerizing stone work.
Another such relics of history can be seen in Devanahalli Fort situated around 35 kilometers from Bangalore. The birthplace of Tipu Sultan is located near this fort. This fort has luring architecture with cut plasterwork. Here is the video on Devanahalli Fort by Umakant Mishra.

Bangalore pays a special homage to literature. For this, a Bangalore Literature Festival is organized in the city. It fetes writing and reading. This festival incites all the bibliophiles and bookworms to meet the writers from everywhere. It brings in the conversation with some of the best literature minds in and outside India. Click on the video to get a glimpse of Bangalore Literature Festival and listen to words of wisdom from the founders of this festival. This video is shot by AOL CoolAge.

During your trip to Bengalore, you can enjoy scrumptious cuisines giving the taste of Karnataka. These cuisines reflect the diversity of Bangalore culture. A special attraction for the food lovers is its street food. There is a food street here, known as Khao Gali, where you can enjoy lip smacking food. Watch out this video on street food of Bangalore, shot with the camera of Diganta Bose.

The City of Gardens is bestowed with several beautiful gardens that are certain to proffer you a tranquil and panoramic environ. One such garden is the Cubbon Park filled with spellbinding views of beautiful flowers and plants all around. It is a Botanical asset as well. One of the most renowned parks of Bangalore is Lal Bagh. It is spread over an area of 240 acre. There are many elements that charm a nature lover in Lal Bagh, such as pigeon house, the museum, Kempegowda Towers, Aquarium Building, Lalbagh Lake, Aviary, etc. Let’s watch a fascinating video on Lal Bagh shot by Mysore Praje.

Now, allow me to turn your attention towards some of the mirrors of history. There are many places situated on the land of Bangalore. One such wonderful palace here is the Bangalore Palace. This splendid palace was erected by Rev. Garrett in the British era. This palace looks like a replica of the Windsor Castle in England. Check this video on Bangalore Palace reeled by Nail Art, Jewellery Making.

You can extend your trip by visiting the major attractions in and around Bangalore. One such place is Hesaraghatta Lake, situated at a distance of 18 kms from Bangalore. It is a scenic fresh water lake that provides utter relief to the mind. Depending on your schedule and time available in your hands, you can also move towards Chikmagalur district, positioned at a distance of 245 kms from Bangalore. This place is apt for all kind of tourists, be it trekkers, researchers and sightseers.

For the lovers of the wilderness, Bannerghatta National Park, located at a distance of 22 kms from Bangalore, is a perfect place to pay a visit. This protected area boasts an immense range of rare and exotic wildlife species such as elephants, gaurs, sambars, chitals, slender loris and much more. I think you have read a lot! So now, it’s the time to watch a video on Bannerghatta National Park shot by Manas Prakash.

Allow me to end the Bangalore sightseeing tour by introducing you to the famous shopping areas. Chikpete and Gandhi Bazar are the two major shopping hubs here. Chikpete is the old market, which existed even in the 16th century. Gandhi Bazaar is another great place providing paramount pleasure of shopping. I can bet that on visiting these markets, you will definitely shop a lot! Let’s watch the video on Gandhi Bazaar, from the rolls of Indian Bazaars’s channel.

I hope these Bangalore Best Travel Videos are informative enough and would help you take an informed decision as to which places to visit in Bangalore. My journey was something really memorable, and so will be yours!