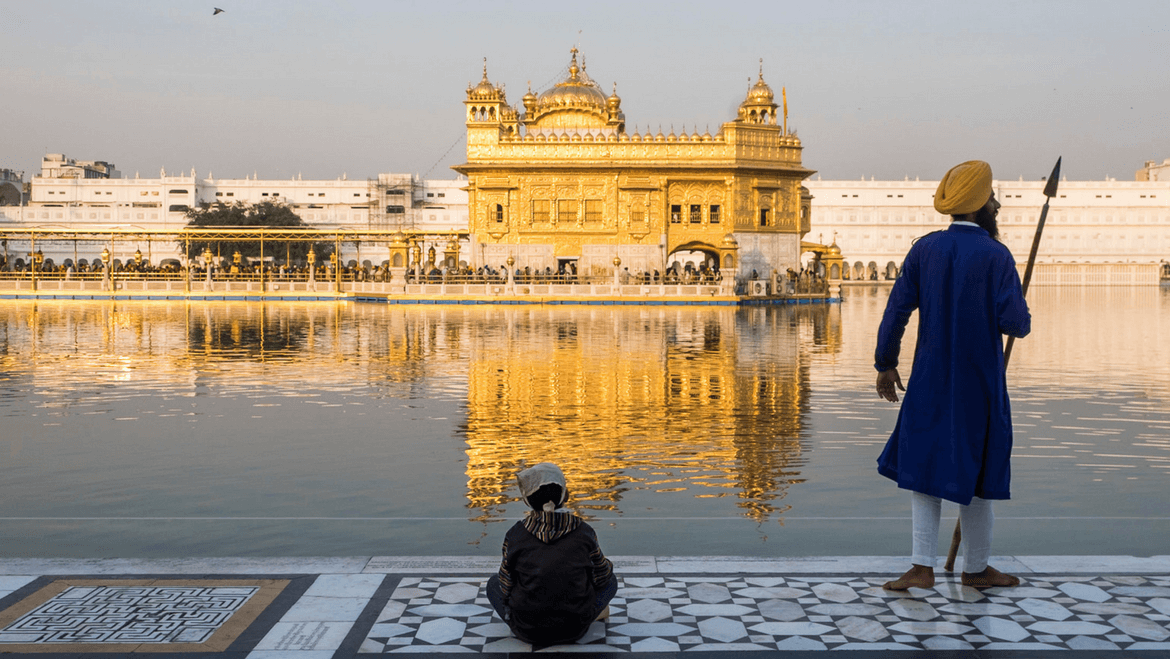 You will be greeted in a unique way by the city dipped in sheer holiness, benevolence, prosperity, and fascinating historical anecdotes. Just after putting my first step on the land of Amritsar, my eyeballs received the invigorating sight of people in turbans and I could virtually feel a unique sense of spirituality overpowering me!

Amritsar, which means the holy pool of ambrosial nectar, is a city with a fine jumble of tradition and ethnicity. Being the imperative seat of Sikh culture and history, the city divulges a glorious past and a swearing future. Serving as the entryway for explorers travelling to India on the overland course from middle Asia, Amritsar rapidly became the hub of assorted commercial activities. In my opinion, what compels tourists the most is the peerless culture of Amritsar.

Let us move the attention towards the prosperous culture of Amritsar. The valiant yet happy-go-lucky style is in the veins of Amritsari people. The most fundamental feature of the locals is their generous and welcoming character. Once you visit its rustic rural areas, you will receive scores of invitation to relish the scrumptious Tandoori Chicken, home-produced wine made of sugarcane, or the famous Makki Ki Roti with Sarson Ka Saag. And how can I forget to mention- the renowned street food especially the Amritsari Kulcha! This video shot by NDTV Good Times is one of the best videos on Amritsar that will take you to the streets of Amritsar, where you can savor the lip smacking food.

The inhabitants of Amritsar are believed to be, to a certain extent, strident in conveying their sentiments. However, the city is not all about Tandoori Chicken, or ‘Syappa’ or the ‘Giddha’; it is more about living life to the fullest. It is a supreme synthesis of the conventional and the contemporary! This consecrated city found by the fourth Guru of Sikhs, Guru Ramdas, is bestowed with one of the most eminent Sikh pilgrimage sites in India – The Golden Temple. Without surprise, it tops the list of attractions when it is about touring Amritsar. So let me begin with the site that is the axis of Sikhism.

The Golden Temple is a place of immense exquisiteness and transcendent serenity. The architecture of the temple is based on artistic styles of Hindus and Muslims, yet embodying a unique blend of the two. The consecrated Sikh scripture Adi Grantha lies on the jewel-studded base within the Mandir Parisar (Temple Premises).  Starting early at dawn and lasting long after dusk, hymns are recited to the accompaniment of drums, flutes and stringed instruments. Rumbling across the tranquil lake inside the temple, this intriguingly striking music stimulates a transient yet influential state of trance in the devotees meandering laid-back around the marble courtyard encompassing the temple and the pool. Right through the day and night, devotees plunge themselves into the lake. It is a symbol of soul cleansing. Adjacent to the temple is the enormous dining halls and dormitories, where every individual, irrespective of gender, religion or race, are fed and lodged for free.

Proceeding from this spiritual site let’s move to the emblem of Indian Freedom Struggle- The Jalianwala Bagh! Telling you about my personal experience, when I went to Jalianwala, I felt like witnessing living souls inside the historical Kuan (well) located inside the site. Ah! I later realized that it was the same well where hundreds of martyrs jumped during the famous massacre! Hence a sudden feeling struck my mind- it is the place one must visit to feel the bravery of the Indian freedom fighters! The memorial at this site pays homage to the thousands of Indians who were brutally killed by the British on the command of General Dyer on 13 April, 1919 while participating in a nonviolent public meeting. The story of this terrible bloodbath is expressed in the Martyr’s Gallery at the place. The video given below is a trailer from the Bollywood flick “The Legend of Bhagat Singh” shared by Nevin Pavithran and it tells you about all that happened in Jalianwala Bagh Masscre, 1919.

You would certainly be feeling a sense of Goosebumps after watching this video showcasing the story behind Jalianwala Bagh Massacre. I guess it’s becoming too emotional now, so move your concentration towards another spiritual site. This time it is of the Hindus! Ram Teerath is an important Hindu site that dates back to the era of the Ramayana. It is situated at a distance of 11 kilometers to the West of Amritsar. From this Amritsar video below Dr. Lakshmi Nair will give you a glimpse of sanctified site of Ram Teerath.

Feeling thirsty and hungry after touring Amritsar a lot? To quench your quest for food and Lassi, which is one of the local beverages of India (Don’t miss it while you are in Amritsar), you can visit the dhabas in Amritsar. For this, you can visit the famous Kesar Da Dhaba. It is one of the famous and oldest dhabas in Amritsar. Click on the video by Matt LaCour to have a look on the scrumptious menu and way of making palatable edibles in Kesar Da Dhaba.

You may move your legs towards Ram Bagh if you are in the quest of serenity. It is a garden bestowed with paramount exquisiteness and is named after Guru Ram Das. Relax your mind at this tranquil place so that you can embark to another sacred Hindu site, Durgiana Temple. It is also known Shree Durgiana Tirath. This holy site for the Hindus is positioned outside the Lohgarh Gate’ it was Mahamana Madan Mohan Malviya who laid the foundation stone of this site. Durgiana Temple brags of a structural design that is somewhat identical to the Golden Temple. Click on the video given below as captured by “placeofinterest”to have a thorough look of the sacrosanct Durgiana Temple.

Are there no sites for other religious other than for the Sikhs and the Hindus in Amritsar? Certainly Not! Constructed in 1876, Jama Masjid Khairuddin is a site of architectural brilliance. It is in Hall Bazaar. If I say that there is a sacred site at a stone’s throw distance in Amritsar, then I would not be wrong! Another sanctified site revered by Sikhs is Baba Atal Sahib. Gurudwara Baba Atal Sahib is counted among the significant tourist places of Amritsar. This holy site defines the opulent ethos and traditions of the Punjabis. It is in octagonal form with an elevation of almost forty meters. Let’s check out this video of Jagan Mangat showing the inside and top view of Gurudwara Baba Atal Sahib.

A tour to Amritsar can be relished in a great way if you carry it out in the Baisakhi season. It is an exuberant festival commemorated with great joy in this city. Several fairs are organized and men and women celebrate this festive day with Giddha and Bhangra. Moreover, wrestling bouts are also organized in Amritsar on this day. It is celebrated with great zeal in The Golden Temple. This video by Jaydeep Wadali will show you how the Baisakhi, one of the popular festivals of India is celebrated in the Golden Temple, Amritsar.

[Video on Baisakhi in Golden Temple]

If you are thinking that your Amritsar trip has turned more into a pilgrimage tour then let me rectify. The attractions of this city are not only about spirituality. It’s about the sites with historical importance as well. One such site is Pul Kanjari. It is a heritage site constructed by Maharaja Ranjit Singh. Around this site are woven many sagas and legends. You just have to travel 35 kilometers from Amritsar to visit this arresting place. Other than a baoli (a bathing pool) and a fort, Pul Kanjari has a Gurudwara, a mosque and a temple, which reflects the secular mentality of the Maharaja. Inside the site are enshrined numerous frescos showcasing scenes of Raj Darbar and significant Hindu scriptures. These frescos are fastened with flowery frames. Check out the video below as taken by Joginder Kalsi.

After immersing the soul in spirituality and prosperous historical past it’s time to witness the international border linking India and Pakistan- The Wagah Border! Wagah, situated at a distance of around 30 kilometers from Amritsar, is an intricate compound of edifices, barriers and roads on both the ends. The most entrancing spectacle of Wagah is the Change of Guard with handshaking between the armies of both countries and the splendor and pomp of the “Beating the Retreat Ceremony” observed every evening. Military from both nations march in great drill and go through the process of taking down their national flags. At dusk, nationalistic zeal augments and lights are turned on indicating the end of the day in the middle of booming round of applause. It will certainly evoke in you a feeling of paramount patriotism. Watch this video of “Neeraj Pareta” showing the commemoration of Beating the Retreat!

[Video on Beating the Retreat at Wagha Border]

I know after watching the Amritsar best videos, you must be eager to embark on a trip to Amritsar. Go grab the perfect amalgamation of culture, history and spirituality!